Strengthen Your Company with Professional Translation in Mind

Translation and Interpretation: Highlights from History 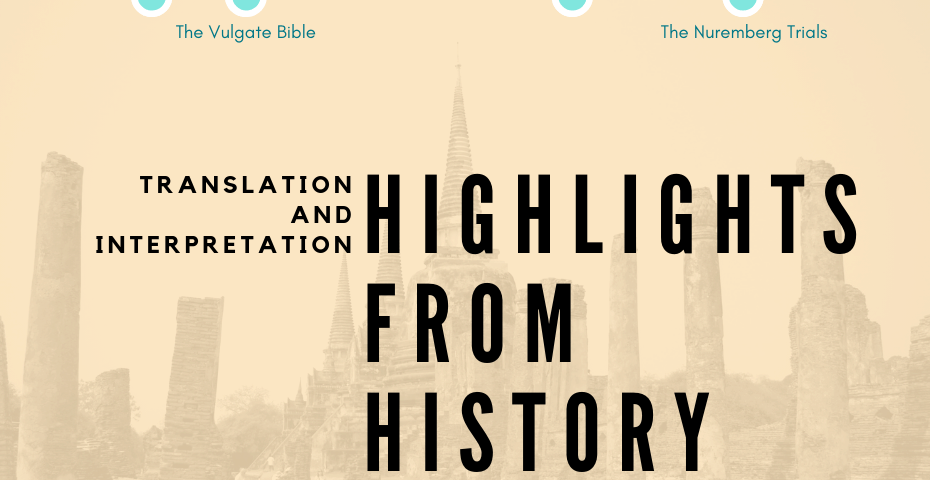 Messages from Long Ago

Out of all the achievements of mankind, language is undoubtedly one of the most important. Ever since a tribe of early humans scanned the horizon and noticed another group approaching from far away, we have worked hard to express ourselves to one another using different means. As civilization progressed, populations increased, and territories grew, united, split, warred, and migrated. Languages multiplied and mingled, and so from the days of the earliest communities, those who could speak more than one language were an important resource for its community.

In this way, the role of a translator or interpreter is one of the oldest professions in the world. From the first pages of human history to this moment, translators and interpreters have been making the flow of information possible, giving us the world we have today. From literal bean counters to the highest heads of state, translation and interpretation services have facilitated human interaction for thousands of years. Today, the translation and interpretation market has a net worth of over thirty billion dollars. And yet, this valuable service often goes unnoticed. Today we want to shed some light on how history has been shaped by language professionals.

Milestones Along the Way

Throughout history, literacy and access to information have often been limited to those of certain classes. From Europe’s Dark Ages through the Enlightenment and beyond, translators were typically educated individuals with a degree of privilege, such as professors and clergy. Some civilizations, as with ancient Egypt, placed such value on language services that they employed public scribes for producing and translating personal and commercial documents. Genghis Khan sought multilingual individuals in each territory he conquered, as did the Hittite kings. In Babylon, Persia, and Assyria, any ruler who was anyone had their choice of the best scribes, translators, and interpreters available.

Language service professionals have been involved in every layer of government and commerce, often possessing multiple talents. Translators and interpreters have not only facilitated some of the greatest events in history but have made sure that the knowledge persists to this day. At the same time, they remind us of all the small ways we are connected across language, culture, and time.

Providing Translation and Interpretation Services can be a dangerous and risky line of work. Language service providers past and present operate in uncertain surroundings, even war zones. Some translators and interpreters were kidnapped and forced to serve their captors, and some have been in danger because of the material they worked with. Backlash over his English translation of Biblical texts (in addition to his opposition to Henry VIII’s divorce from Catherine of Aragon) saw William Tyndale executed in 1536, and 1991 witnessed the murder of Hitoshi Igarashi whose offense was his Japanese translation of The Satanic Verses, by Salman Rushdie.

To this day, there are countless Language professionals serving in war zones, legal courts, medical facilities and refugee camps with their knowledge and perfect command of 2 languages. This blog post is a testimony to their contribution to humanity, to society and for us to learn about how they have helped shape the world we know today.

Interpretation and Translation Services are essential to keeping history alive, through large-scale work and encounters between a few people that do not share the same language. Today, information flows at speeds barely imaginable a century ago, making language services even more valuable. Knowledge is exchanged from one corner of the world to another- a scientist shares a new discovery with their peers, a novelist publishes a thriller, a newly-elected politician gives an address. Any business desiring to grow their international market benefits greatly from the expertise of a professional translation company for their marketing materials, proposals, web content, and much more. By working with the right translation agency, a business can make its own history and open itself to a world of possibility.