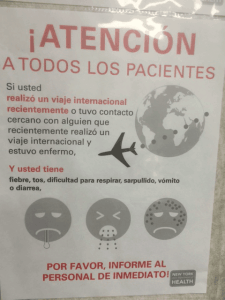 Medical translation is extremely important to bridge the communication between the healthcare provider and the patient. Having instructions, forms, treatments, and important documents translated to facilitate communication and ensure the wellbeing of the patient are not only useful but a basic need. The world is moving fast and its population with it; globalization has affected many aspects of our lives. We have more people traveling and at a faster rate, we have more people on the move and living in different places than ever before.

Unfortunately, Globalization is not only happening with goods and services, but also with serious illnesses, which is causing global problems. Illnesses and their speed of propagation have been depicted in movies, but that phenomenon is now part of our modern life.

Examples of such infection diseases include:

The new international problem is Ebola, far more lethal than the previously mentioned examples. As of February 2015 the deadly outbreak has been ongoing, causing a terrible epidemic situation in West Africa especially in Guinea, Liberia and Sierra Leone. I recently went to my primary care doctor and found medical translations of instructions to detect if international travelers might have Ebola symptoms. The symptoms document was translated into 7 languages: Spanish, Russian, Chinese, korean, Portuguese and Italian.

I was so impressed with the doctor’s office service and efforts to inform their clientele by providing instructions in multiple languages. Knowing they have patients who do not speak English as their native language, they were protecting their clientele by having those important multilingual versions of the instructions in display at the entrance.

Medical translations of symptoms and medical instructions can save lives and help the overall well-being of the population. Globalization has propelled the need for more multilingual medical translation. Accuracy and proper use of vocabulary are imperative to achieving the main goal of the medical translation: bridge the language gap by offering the same information to all the patients.