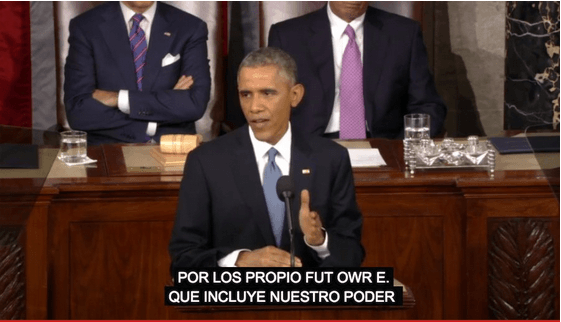 On January 20th, the President delivered his State of the Union Address.  For the convenience of Spanish speaking viewers, the White House Youtube Account offered live streaming of the speech complete with Spanish subtitles.

This subtitling effort is thoughtful and necessary- as Spanish audiences are heavy consumers of news. But unfortunately- the quality of the subtitling served more as a hilarious distraction than an aid in helping Spanish viewers to understand the messages delivered in the speech.

What’s more, you don’t even need to be a native Spanish speaker to spot the funny errors in the subtitles!  Have a look for yourself:

What’s “fut owr e”?? We’re pretty sure it doesn’t mean anything in any language.

There aren’t a lot of Spanish words that have a letter “k” in them. Once again, we’re pretty sure “fleks teams” doesn’t mean anything in any language.

Other errors included grammatical errors and misspellings that would have stood out to Spanish speaking viewers:

“Viv” and “Ensias” are not Spanish words. Although- “ensias” does sound a lot like “encías” which means “gums”.

These funny subtitles were much discussed in the social networks during and after the broadcast, and while definitely amusing, we can’t help but think of how those responses can begin to impact the reputation of a professional organization.  This situation is no different than those examples of mistranslation we’ve looked at in the past.  These are all corporate blunders that result in wasted resources- a great idea was not well executed because the translators used were neither professional nor proficient.

Lesson learned- A company’s reputation is at stake when targeting audiences on a platform as large as Youtube.  Using translated subtitles is a necessary tool to reach a global audience, but subtitling is a service that must be properly planned and requires the services of professional and skilled translators.