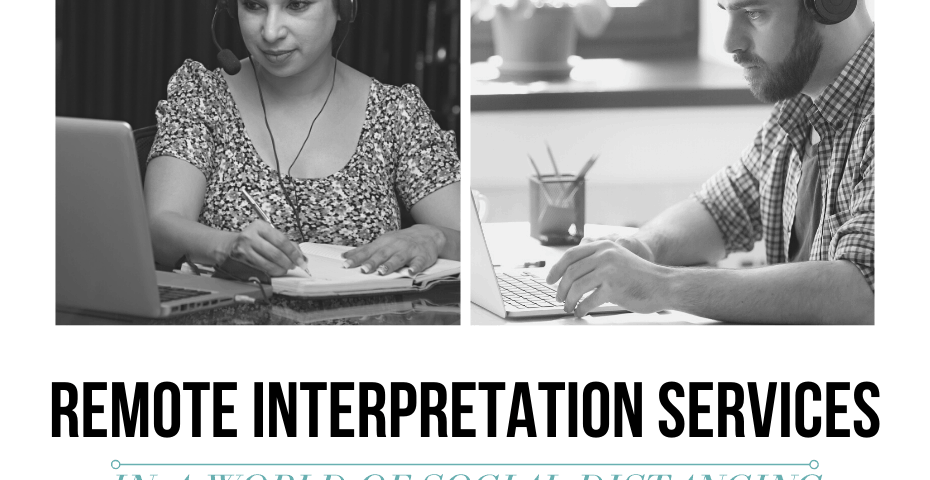 At this moment, JR Language is seeing unprecedented demand for language services like document translation and remote interpretation. Our engagements for conferences and events have transitioned from live interpretation to remote interpretation by phone or video. In this time of quarantine and social distancing, we cannot afford to lose connection among language groups when it comes to saving lives, sharing resources, and continuing to move businesses forward.

In a recent article of our translation blog, Remote Phone Interpretation: Language as a Lifeline, we talked about over the phone interpretation, and today we want to detail remote interpretation by video, its applications, and the differences between the two.

Lack of Language Interpretation is Costly during Crisis

The old saying is that those who do not learn history are doomed to repeat it. This is glaringly obvious in past (and ongoing) crises, like the water contamination in Flint, Michigan. Spanish-speaking residents were not adequately supplied with safety information in Spanish and were placed at unnecessary risk. Hurricane Katrina’s devastation was suffered by thousands of multilingual people who may or may not have had access to language support, whether spoken, written, or in sign language.

Professional translators and interpreters are essential for disaster relief as cultural competence is another skill they offer. When an earthquake struck Nepal in 2015, aid officials found difficulty in conveying spatial and geographic information in local languages. Another example is Australia, where indigenous languages like Guugu Yimithirr use North, South, East, and West instead of right and left. Lack of professional interpreters leave people unprepared, which cost lives and livelihoods in times of disaster.

When to Use Video Remote Interpretation

Currently in the United States, Spanish comes in second closely following English as the most commonly spoken language in the US, with Chinese in third place and Tagalog in fourth. Large demographics speak languages other than those four; French, Vietnamese, Arabic, and Korean are spoken by over a million people each in the US according to the 2016 American Community Survey. Interpretation Services requests in the US are rising and due to the new reality of social-distancing, the remote version of interpretation is in higher demand.

Remote interpretation by video is useful in multiple situations such as conferences and business meetings. It can be specifically designed for the event and provide more immediate communication as no mobilization of people is necessary and would require less budget. Read on for more about several institutions that use video remote interpretation.

As we weather the COVID-19 pandemic, based on recommendations from the Centers for Disease Control and Prevention (CDC), physicians and medical staff everywhere are urging patients to use telemedicine whenever possible. Remote video interpretation fits perfectly into these situations, as medical interpreters are quickly available.

News organizations around the world use interpreters, remote and in person, to report current events. They can be seen from the BBC to NBC to Al Jazeera to local news. Video interpretation allows news to be conveyed in real-time across multiple language groups, changing history in seconds.

Governing bodies local, national, and international, have a responsibility to their constituents to keep them informed and protected as well as possible. This includes each language group represented, as language services are a human right. No one is to be denied help during a crisis because of a language barrier that could be easily broken with a phone or video call with a professional interpreter primed for the event.

Governments often require live interpreters for events like press conferences, public addresses, and meetings with other officials. Up to now, the norm was to have an interpreter physically present, we are eager to see how that changes or if it stays the same.

Lectures and announcements are given by universities on a regular basis. Often, they need professional interpreters on-site for lectures for groups of students or professors from other countries. With travel restriction and the new massive migration to e-learning, we expect changes in the interpretation services for academia. Also, local school districts use on-site interpreters for parent-teacher conferences that could well be conducted with remote interpretation.

Remote video interpretation should be used as a resource by every medical institution, law firm, insurance company, and public service in every nation. It’s not only faster to coordinate, but convenient.

Differences Between Video and Phone Interpretation

The mission of our translation company is to facilitate multilingual communication. During this crisis, our goal is to help humanity confront and end this pandemic by removing any language barriers that would prevent this. We are also changing and adapting to the recommended new work environment by working remotely but fully operational. We will continue to bridge language barriers whether the communication is written or spoken.

During the COVID-19 pandemic, language barriers cannot be allowed to persist. Information is critical in managing and conquering COVID-19. The rights of individuals cannot be upheld if they do not have access to the right information, translated or interpreted by a professional fluent in the language, culture, and subject matter. Any business can also benefit from remote interpretation for communicating with multilingual employees, clients, partners, and officials. We no longer live in small pockets where we speak the same language, that mindset can cost lives. We need to be able to communicate in any language necessary and JR Language can provide the help you need.