Benefits of Working with a Professional Translation Agency 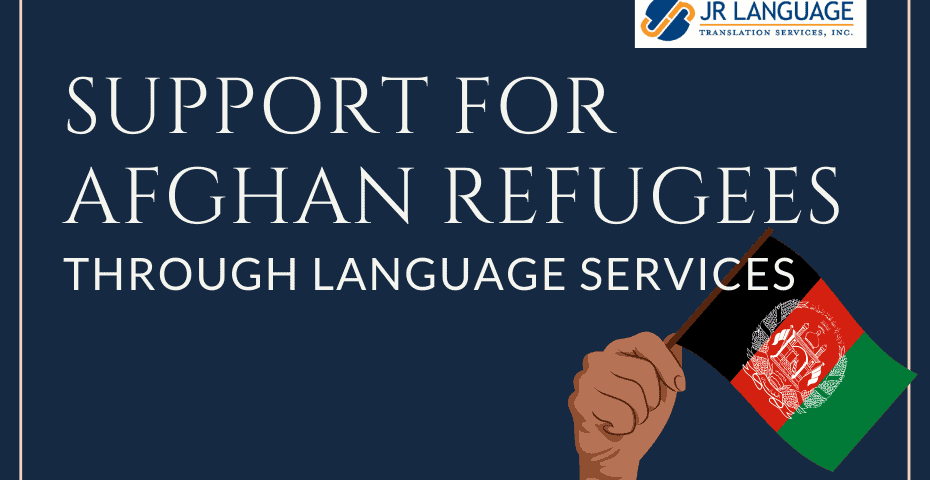 The recent political upheaval in Afghanistan has left thousands of people displaced or fleeing the country. The Taliban takeover has shaken the world and offering a safe refuge to people affected by those events has become a priority in many areas of the world.

Americans are happy to open their doors, with 75% of Americans supporting resettling Afghan refugees in the US. Already tens of thousands of Afghan refugees have been welcomed, but there are still thousands more fleeing a difficult occupation and seeking safety. The current push to resettle Afghan refugees is one of the largest mass mobilizations since the end of the Vietnam War. This influx of Afghan people into the country has an effect on several areas of service, from healthcare organizations to government agencies.

In additional to the trauma refugees have endured in their home country and on the journey over, they now face a myriad of challenges, including a new culture, way of life, and language. Afghan refugees who don’t speak English will encounter language barriers for nearly every service they need, and this can make an already challenging experience more frustrating.

New arrivals are brought to a resettlement center, where they must undergo a series of health checks, government visits, and paperwork. This complex process is slowed by the language barrier, and simple questions can become sources of annoyance for the refugees and the center workers. One way to expedite this process is to have document translations and interpretation services available for the refugees in their native languages.

JR Language is a translation company that can help your organization communicate with Afghan evacuees at every step of the process, from the resettlement center to their final destination. Our experienced professional interpreters and document translators have a deep understanding of both the languages and cultures of Afghanistan.

Afghan Refugees in the US

The US Government has given Afghan refugees Priority 2 Status, meaning the Department of State has named them a “group of special concern” and recognizes the need for resettlement under the circumstances. This designation opens the door to thousands of refugees and their families moving to the US and as of September 1, more than 23,000 Afghan evacuees have already arrived.

This is just a fraction of the number of people who will ultimately be resettled here; the US Military has pledged to help 50,000 evacuees, many of whom served alongside the military or helped the military effort in Afghanistan. The sheer volume of people coming over highlights the need for efficient systems to keep the process moving, and not delay further refugees from finding safely.

The language barrier poses a problem for both the refugees and the organization providing resettlement services. Assistance from a professional translation agency can help speed the process along by eliminating confusion and make the refugees feel more comfortable and supported in their language of choice by use of translation and interpretation services along the way.

The Languages of Afghanistan

JR Language provides interpretation and translation services for a multitude of languages, including those spoken in Afghanistan. Our language services company is ready to work in the following languages:

Languages change with every boarder you cross and when you cross an entire ocean, it’s easy to feel like you’ve left your entire life behind. Language barriers can be isolating for people, especially those who are already struggling. To provide the best and most emphatic help, it’s imperative we meet people where they are and communicate with them in a tongue they are familiar with. From hospitals and airports to resettlement centers, all of the meetings and procedures necessary to help refugees find a new life are made easier with professional interpretation services that keep the conversation moving.

Interpretation services are offered in a variety of ways to best serve the needs of your organization. On-site interpreters can welcome refugees to resettlement centers, explain cultural norms and expectations, and help refugees settle into a new life. Remote video interpretation and over the phone interpretation are available as needed to make meetings, health care visits, and other conversations move smoothly. Additionally, having translated documents available at every stage of the process makes it easy for government officials and health care providers to get the accurate information they need.

The world mobilized together to help Afghan evacuees leave behind an oppressive occupation and find a safe new life for their families. But this process isn’t quick or easy, and many of the refugees face an immense language barrier and the task of learning English. With document, on-site interpretation, remote video interpretation and phone interpreting by JR Language, you can keep the process moving smoothly for everyone in Dari, Pashto, Farsi, and Urdu.