In Social Media, Successful Translation is more than words

Much like other forms of marketing, most companies look for the kind of hook in social media that resonates with their audience. Keep in mind that all media (and most particularly “social”) can take on a life of its own. Note also that there are people on the planet who are happy to take a message out of context. While we don’t want to instill fear, we DO believe it’s important for business owners and marketing teams to do their research. Small errors can become fodder for huge embarrassment, once international social media becomes part of a company’s marketing actions.

Mega companies such as Coca Cola have their share of international social media success, but are not immune to the occasional failure. 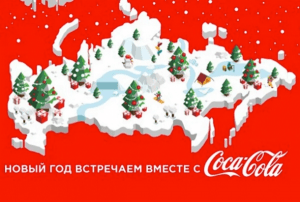 In December 2015, the image shown here was posted to Vkontakte, a popular Russian social media platform. The text featured is an accurate translation, innocently wishing the viewer to “Celebrate winter holidays from Moscow to Vladivostock”. The entire piece is visually well branded and the message could not be more benign. In the western hemisphere, we might consider its counterpart to be “Happy Holidays”.

What could possibly go wrong? The image.

While creating the image someone missed a simple detail: Kaliningrad.

The lack of including this previously annexed area, which has had considerable historic and strategic importance, was enough to create harsh backlash in Russia. Russian social media carried images of people pouring Coca Cola down their toilets with the hash tag #bancocacola. To make matters worse, the company scrambled to salvage the campaign and replace the image with another. Unfortunately this new map included Crimea, which Russia had annexed from Ukraine in 2014. Following this action were a series of backlash posts from Ukraine consumers. OUCH!

“Everyone” is not your audience. If your product has experienced regional success, congratulations! Examine your devoted core of customers. Don’t depend on the outliers. Look at those who purchase often and interact with your company, now. Define what other brands and products they talk about to help you understand them.

Some smaller companies may be ready to say, “We don’t have the budget for case studies or market research.” If that’s you, remember that this is about SOCIAL media. There’s often enough soft data out there to begin the process with an internal team. Speak with a translation service that knows how to begin this process. “Like and Follow” those people who talk about your products. Growing a brand does require effort and taking it to a higher level will require budgeted funds for promotion and translation, eventually. Start where you are.

Using what you learned from your current customers, look to other cultures. If you believe your product has the potential for a broader audience, identify them. Be specific. Build a couple fictional profiles of people who would use your product and imagine other activities in which they participate. For international social media as well as planning for accurate translation services, this helps your group consider where to find your prospects.

Building these profiles is similar to writing a short story.

Give your prospective customers: Names; Occupations (if that’s appropriate); Income; Age; Residence; Other interests. You might be surprised what comes out of this exercise.

Socially Relevant Translation may SAVE you

The potential to reach international markets with your product will often be limited by your ability to speak to them in their own language while being socially relevant. Part of the challenge with social media is “distance”. This exists everywhere social media reaches whether inside or across cultures. The company “posting” doesn’t have the luxury of “inflection and body language” that an in-person conversation provides. So, the tone of words displayed is left to the readers’ interpretation.

That’s why translation is one of the keys to international social media success. The translation company you work with needs to understand more than “proper” format and words, but slang and the culture of your audience. This step toward a personal translation and interpretation of the company message cannot be overstated!

As we observed with the study on Coca Cola, anyone can make a mistake. We expect over time the beverage manufacturer will recover. With reported annual revenue of over $44 billion in 2015, they appear to have the funds to dedicate toward mending such translation faux pas.

Assuming your company would prefer to spend budget on promotion instead of damage control, consider speaking with a translation service company who can guide your campaigns toward social success. JR Language provides translation services into the most popular languages used by international businesses. Our translators work only in their native language to ensure accuracy and efficiency. We’re happy to work with companies seeking a new international audience.