Who Can Certify a Translation of My Documents? 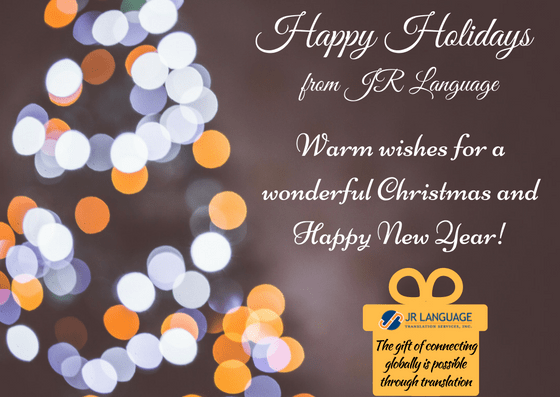 Christmas Holiday Traditions Are Unique to Each Culture

Christmas has arrived!  Celebrations of this holiday are just as unique to each culture as are languages.  At JR Language Translations, culture, language and family are our passions.  So, amidst our own holiday planning we’d like to share a few of the Christmas traditions that are observed in our families’ home countries.

Although not a public holiday, Christmas is celebrated in Taiwan with plenty of lights and- romance!  Christmas in Taiwan has been described as more of a Western Valentine’s day.  Whereas in the U.S the holiday is spent with families and relatives, in Taiwan it is a time to spend with your significant other.  Restaurants and movie theatres will be filled with young couples having date nights, and malls are expected to be frequented by shoppers looking for the perfect gift for their friends.  The holiday is also a time to get together with friends at parties and shows.

Christmas lights are a popular attraction in one of Taiwan’s oldest cities, Tainan.  The annual Christmas Light Festival in the city attracts tourists from within and outside of the country.  This year, the Christmas Light festival is featuring “Galaxy Christmas”.

Hong Kong has one of the most festive Christmas Celebrations in the world, with the country’s Winterfest (celebrated from November 25th to January 1st) named as one of the Top 10 Places to Spend Christmas in the whole world.

The giving of elaborately crafted Christmas cards and sharing of gourmet Christmas dinners among family members boosts the holiday spirit.  Thanks to the mild and even sunny weather in the country at this time of year, people enjoy sparkling Christmas displays lining the malls and street corners, marvel over breathtaking holiday light shows, and attend holiday performances.

How do you wish someone a Merry Christmas in Cantonese?  Seng Dan Fai Lok!

Puerto Rican Christmas, known as “Navidad” is celebrated from early December to December 25th.  The four biggest Christmas holidays are-

Fun, family oriented traditions during this season include “Las Parrandas”, in which a group of family and friends (the “trulla”) go over to a neighbor’s house in the late evening to sing traditional Puerto Rican Christmas Carols.  The songs sung are the gifts or “aguinaldos” which continue on until they are invited into the neighbor’s house to share in delicious Christmas treats and drinks.  The trulla then moves on to another neighbor’s home where they sing and celebrate again.

Three Kings Day is considered the most important celebration in Puerto Rican Christmas, and it honors the story of the Three Kings who were guided by a star in the sky on Christmas Day to Bethlehem where Jesus was born.  On El Día de los Reyes, children wake up early in the morning to see what gifts the Three Kings have left for them.

In Venezuela, a predominantly Catholic country, Christmas festivities center around the birth of Jesus.  Starting on December 16th, mass services called Misas de Aguinaldo are held daily until the 24th.  Nochebuena begins on the 24th, and midnight mass known as Misa de Gallo is held on that evening.  Preparations for Christmas meals are a family affair, and include traditional dishes like Hallacas, pan de jamón and dulce de lechoza.

Like in Puerto Rico, “aguinaldos” or Christmas carols are common in Venezuela, but the very popular type of music played at Christmas parties, in television programs and Radio are called “las gaitas”. Gaita is a style of Venezuelan folk music originated from the city of Maracaibo in Zulia State.  People dance to the gaitas during La Navidad and all the way to New Years Eve. The “Las Gaitas Venezolanas” are a source of national pride for Venezuela.

On the 25th, children receive gifts from “el Niño Jesus”.  Colorful displays of El Nacimiento (Nativity scene) can be found in homes, offices and churches.  Christmas trees are also displayed at some homes, although to a lesser extent than El Nacimiento.

Christmas celebrations in Mexico are similar to those in Puerto Rico and Venezuela. One of their traditions includes the beautiful “Las Posadas”.

Las Posadas is celebrated primarily in Mexico and by Mexican-Americans in the United States between December 16 and December 24.  This tradition commemorates the journey taken by Joseph and the Virgin Mary from Nazareth to Bethlehem in search of a safe refuge where baby Jesus could be born. Families and friends get together to sing “villancicos’ or Christmas Carols to Baby Jesus. Children will break open star-shaped piñatas filled with candy and fruit. While their roots are in Catholicism, Protestant Latinos also observe this tradition.

Las Posadas has been a tradition in Mexico for 400 years. It was used by the missionaries to evangelize Mexico.

On January 6th, Three Kings Day(El Dia de Reyes) is celebrated in Mexico  with a delicious bread roll called “el Roscón de Reyes”.  Hidden inside the breadroll is a “frijol” or bean.  The person who finds the frijol gets to host a celebration called Día de la Candelaria, on February 2nd which marks the official end of Christmas for the Catholics.

Like in Venezuela, Christmas traditions in Argentina are greatly influenced by Catholic roots.  Instead of a white Christmas, Argentina generally enjoys clear skies, warm weather and beautiful flower blossoms during this time of the season.  Christmas food consists of cold plates like fruit salads with wine.

On the evening of the 24th families attend Christmas mass and then gather with their families at the grandparents’ homes to celebrate “La Navidad”.  Children write letters to Santa, and receive presents on January 6th, Three Kings Day.

Spain, the mother country, is where most of these traditions were originated.  On Christmas Eve (Nochebuena), families gather for a delicious meal.  Christmas Day on the 25th is considered a national holiday in Spain, so a lot of businesses are closed in observance.  Families often gather for a big meal during lunchtime on this date.  New Year’s Eve (NocheVieja) is a big celebration across the country, where huge parties are had in streets, clubs and more.  A special tradition on this date is the eating of 12 lucky grapes to celebrate the arrival of the New Year as the clock strikes twelve.

January 6th marks the Feast of the Epiphany, known as Día de los Reyes Magos.  On this date, children wake up to find gifts that the Los Reyes Magos have left for them in their home.

Localizing the language of Christmas

We’ve often discussed in this translation blog, the complexities of Spanish translation when it comes to localizing terms and messages for different countries.  The same goes for translation and localization of Christmas related vocabulary.

What about the Word for “Nativity”?

It’s difficult to get away from translation and localization, even during the holidays!

It is heartwarming to know that there’s a holiday in which so many countries around the world dedicate to celebrating and sharing with family and dear friends.  Our heartfelt thanks to our wonderful clients, dedicated translators and interpreters and the rest of the amazing JR Language team for a great year.  From Our Translation Company family to yours, we wish you a wonderful Holiday.  ¡Felices Fiestas!