Localization makes it possible for your brand and product to communicate effectively with people from different locales around the world.  The process of language localization goes a step beyond simply translating content by adapting text from one language into another to make it both culturally and linguistically appropriate to the locale(s) in which your products or services will be sold.

The objective of localizing content for a product or a service is to give that translated content the look and feel of being specifically written for that target audience, no matter the language or culture. 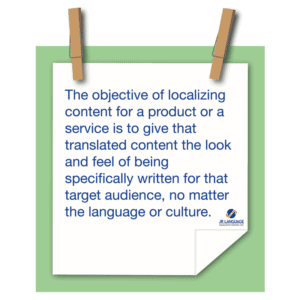 What do we need to localize?

Here are several ways in which we implement localization; a few of them will be familiar to you.

Those of us who’ve traveled abroad have encountered the issue of currency conversion as we hastily determine how many US dollars we need to get enough Euros, Yens, Pounds (and other currency types) for a stay overseas.

Once you’ve reached your destination, you may notice that the currency formatting is different from formatting in the US.  In several regions, the monetary amount of 1,200.00 may be written as 1.200,00.  You’d need to educate yourself beforehand, to avoid confusion when shopping or ordering abroad.  In English, the currency symbol is always placed before the number:

In many other European languages, however, it is placed after the number.

Formatting may also depend on the country, here are some examples:

Note how every country formats pricing differently, interesting isn’t it!

Currency localization is an important part of translating and localizing e-commerce sites.  We’ve often worked with clients wishing to target different global market segments, and adapting to the correct currency for each market segment is a must.  Imagine how a shopper in Europe would feel if she couldn’t figure out the prices of what she needed to purchase, all because they had been left in US dollars!  Sure, customers can probably do the conversion themselves- but that only takes away from customer experience on your website.

Though simple, localizing currency is crucial to communicating well with an online, global consumer base.   Currency localization ensures each audience segment is able to read the pricing in accordance with the currency format they are used to reading in.

Formatting is a simple localization task that makes a big difference in giving a translation the look and feel of being created for a specific target audience.  Professional documents are often dated and may also contain other important dates throughout the text.  Thus, a business contract originally in English that needs translation into Arabic must be localized so its dates are interpreted in the same exact way by a native Arabic language speaker as for a native English speaker.

The formatting of addresses and phone numbers also differ from country to country.  For example, USA  dates are written as MM/DD/YYYY but in some other countries like Spain or Argentina, it is written as DD/MM/YYYY.

Other elements that require localizing include units of measurement and weight. The measurement system we are familiar with is likely to be completely foreign for individuals abroad.  Consider for example, shoe size.  If you requested a size 8 shoe in a shoe store in Japan, you’re might get some confused store clerks.  That’s because Japan follows the metric system, which means shoe sizes are measured by the centimeter.  Thus, you’d need to be asking for a 25.5 size shoe (if you’re female) or size 26 (if you’re male).

How Shall I Address You, Sir? Miss? Professor? Doctor?

The form of personal address is also a cultural element that impacts translations.  In most professional settings in the US, it is common for employees to address each other by their first names when contacting one another.  In several other regions, this form of address is considered unprofessional and inappropriate.  For instance, formality is required between strangers among  German and Spanish speakers.

As a professional translation service company, we frequently receive requests for business document translations into multiple languages.  If that document happens to be a letter or business memo, one of the first elements we consider is how we address people within different cultures and languages, it is simply the best practice.

Thus, something as simple as addressing a letter must be localized to the culture, while considering other elements such as how well you know the addressee, and if that person is older or has a special title. It is all cultural!

Just like words, colors carry meaning for all cultures.  For example- in most western cultures, Red symbolizes love and energy.  In Asian cultures, red symbolizes good luck, happiness, and prosperity.  In other cultures, however, red is ‘dead’: In the Middle East, the color is symbolic of danger and evil, and in South Africa, it is a color of mourning.

For such reasons, you can see why color is culturally sensitive and something to be handled with care when including them in a multilingual site, in translating marketing campaigns, and much more.  Though you don’t mean to, you can very easily damage your brand reputation by failing to localize a color that is offensive to certain cultures.

The same goes for images.  Localizing graphics and images means creating an image that is culturally sensitive to your chosen target market(s) and also conveys the message of your brand.  Not the most simple task- but is possible with the right translation services company that is experienced in localizing your content properly. 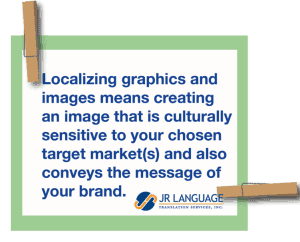 Flags Are Not Languages!

A common assumption is that flags can be used to represent languages.  The problem is that those flags represent countries and regions, and within each country, a variety of languages are spoken, some countries have multiple official languages!  Imagine how online shoppers in Mexico would feel then, upon seeing the flag of Spain being used to representing the Spanish language- they may think that the site sells only to Spain and not Mexico!

To clarify this point, the Spanish language is spoken in Argentina, Colombia, Peru, and Venezuela.  Within the United States, there are also a sizable number of Spanish speakers.  You can see now, that using the Spanish flag is not a wise choice for Spanish-speaking customers living outside of Spain.  Doing so would be a failure to localize!

Language localization goes hand in hand with identifying the target audience, it is determined by the culture and the country to which the piece is adapted for. By working with professional translators and being guided by a dependable translation agency, you can be assured that your translated content will be appropriate and easily understood by the intended users of your document and websites in any part of the world.