Grow A Pool of New Customers with Website Translation 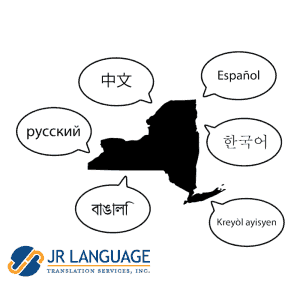 All New York City websites will soon be required to provide translations of their web content.  Website translations will be delivered from English into the following 6 most common languages spoken in New York (other than English):  Spanish, Chinese, Russian, Bengali, French Creole, and Korean.

On March 14th, Mayor Bill de Blasio signed into law a bill that requires “every website maintained by or on behalf of the city or a city agency…include a translation feature…wherever practicable, in languages other than English.”

The details of this law, titled Int. 673-A, includes the implementation of a new translation feature that generates a prompt for translation services of city websites in the viewer’s native language.  This is in addition to the existing Google Translate feature that translates the NYC homepage into 90 languages.

This helpful initiative for translating websites is certain to make a significant impact considering the fact that NYC.gov, home to websites of over 125 City agencies, entities, initiatives and organizations, receives around 45 million visitors who view 800 million pages of its content each year!

When the bill takes effect in less than 90 days, crucial information on the City website pertaining to Housing, Voter Registration, Education and more- will be made accessible to the limited English proficient population in NYC, which consists of the following:

“New York City is an amalgamation of cultures, heritages and languages..That is why we strive to increase inclusivity…Whether it’s creating a more accessible City website…Intro.673-A… strengthen our efforts to be more inclusive.”- Mayor Bill de Blasio

As a translation company, JR Language applauds the enactment of this bill for website translation.   It is a prime example of recognizing that not all local residents are native English speakers, by establishing efforts to the make public information available to these individuals in their native languages.  Now it’s your turn to ask yourself- What does this website translation law mean for your brand?  Though you’re not running a City website, you too can increase inclusivity amongst your customer base by providing content in their native language.  The translation law may lead to further requests for translation services in NY, as more residents need access to content in a language other than English. JR Language looks forward to helping both the public and private sector to reach more people in their native tongue.