Understanding Chinese to Get the Best Chinese Translation 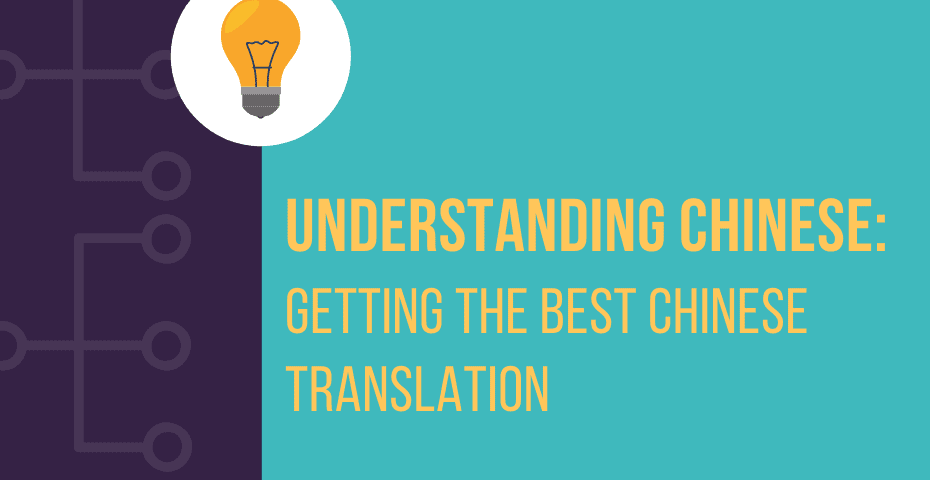 Over one billion people in the world speak Chinese as their first language. The Chinese language has a long history with the first archeological writing dating back to 1200 BCE. Chinese is also one of the six official languages of the United Nations, along with English, Spanish, French, Arabic, and Russian.

Chinese is the most spoken language in the world and to access this immense market you need the help of a translation services company that has a prepared Chinese language team to select the right professional Chinese translator for your target audience. In order to find the best Chinese translation or interpretation service to meet your needs, you’ll need to know a few key characteristics of the interesting Chinese language which we will cover in this blog.

The Chinese Language is Actually a Group of Different Languages

There are five categories of dialects within the Chinese language, which have more different subgroups. In fact, some scholars would not consider Chinese dialects as dialects but a different language because people speaking different dialects would have a difficult time understanding- or not understanding- each other at all.

Mandarin is the most widely spoken form of Chinese and the official language of the People’s Republic of China. Other Chinese dialects include Hakka, Min, Wu, and Xiang. In rural China, dialects exist that have only a few hundred speakers, and can be hard to understand for someone only a few towns over. In all, there are over 200 Chinese dialects!

What does this mean for you when selecting a Chinese interpreter for language interpretation services? You’ll need to know where your audience and/or speaker(s) come from to determine the Chinese dialect you require. Don’t be surprised if a translation company asks you for more information when you simply ask for a Chinese interpreter- the first step to arranging the best quality interpretation service is to determine the right language you need.

Below is a table that shows the variety of dialects spoken in different areas and illustrates why we need detailed information about your target audience and objective when helping you with remote interpretation, or in-person interpretation needs:

Though Mandarin is the official spoken language of Mainland China, local dialects can take precedence in many areas.

There are 2 official forms of Written Chinese – Important for Translation

The two official forms of written Chinese are Traditional and Simplified, and the unofficial form of written Cantonese. Most of the simplified characters were implemented by the government of the People’s Republic of China during the 1930s and 40s to help improve the literacy rate of the country. However simplified characters were used in the cursive styles often referred to as “grass style” which has existed for centuries. Traditional is the original, older form of Chinese that is still used in Taiwan, Hong Kong, and Macau.

Below is a list of translations that show the difference between written Simplified Chinese and Traditional Chinese.

Traditional Chinese is mainly used in Taiwan and Hong Kong while Simplified Chinese is used in Mainland China and Singapore. Written Cantonese was developed by people in Hong Kong. The purpose is to make the writing ‘sound’ more like Cantonese than Mandarin.

For example, “taxi” and ” do not” can be written in several different ways.

Chinese characters are not phonetic but logographic meaning marked by a letter, symbol, or sign used to represent an entire word. The characters were designed as simplified pictures. For instance, in both Simplified and Traditional, the word for cat is 猫. If you use your imagination, you can see the eyes and ears as the two +, the body is the box with the + in the center, and on the left is the tail. For the word dog, 狗, you can see the dog from the side facing front, the small square is its face, and its tail is on the left. As you can see, you need the expertise of a professional translation company and their Chinese language team to help you decipher and translate the words.

Chinese is a tonal language and you can see below how the tones are mapped for Mandarin which has five tones. If you say the word “ma” and have your voice move as the arrows are on the vowel, you can get an idea of how Chinese is spoken. Each way you say it has a different meaning. In contrast, Wu has eight tones and can change the meaning of the word. For Chinese people who speak all kinds of different dialects and couldn’t understand each other, the written form is the most direct and easiest way to communicate. The meaning of that character would not change no matter how you pronounce it. 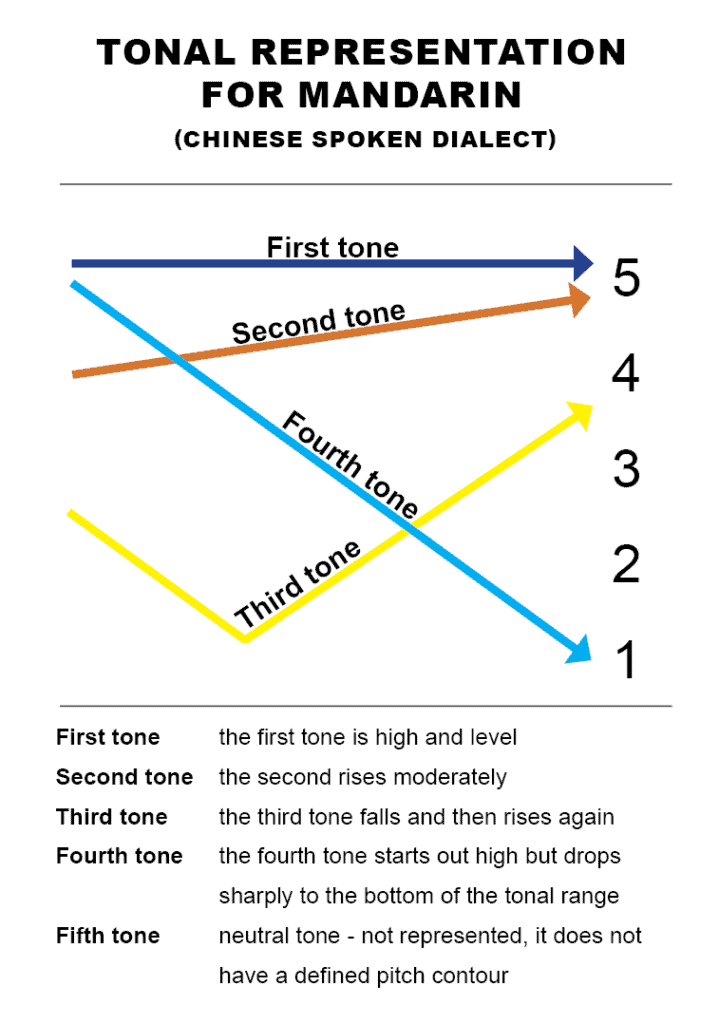 This creates a great opportunity for businesses to reach a larger share of the Chinese market. By translating documents from English to Simplified Chinese, you can make an impact with an audience of up to over 1 billion in Mainland China where it is used as standard script. If you do a translation into Traditional Chinese, you’ll potentially gain audiences in Hong Kong, Macau, and Taiwan. It should be noted, however, that an increasing number of people in Hong Kong and Taiwan are able to read Simplified Chinese. And, in Mainland China, Traditional Chinese has not completely disappeared – you’d still encounter it in media broadcasted from Hong Kong and Taiwan and traditional text remains in publications that were produced before the reforms.

The best-case scenario then, for businesses and organizations is to have reliable capabilities in both Simplified Chinese and Traditional Chinese. A transcription of a critical public service announcement needs to be translated and subtitled into both written forms of Chinese in a video translation so that its message is well understood by Chinese people worldwide. Likewise, a website that offers content professionally translated into Chinese Traditional and Simplified holds more credibility and provides assurance to Chinese viewers no matter their location.

What should you look for when contacting a translation company?

A good translation services company should be knowledgeable of culture and language. This is why our translation agency insists on understanding your audience and the usage of your translation project to select the appropriate professional translator and interpreter for it. Only someone with an understanding of the language and culture can deliver translations that are not only accurate but localized to the audience.

When we receive your request for Chinese translation services, we will need answers for the following questions to complete your translation project successfully:

To people not familiar with the Chinese language, it can seem mystifying. When each word has its own character that has to be memorized and different tones that can change the meaning of words, it can seem overwhelming to someone used to the Roman alphabet and simple phonetics. At JR Language we work with native speakers who have studied their own language in order to translate effectively and flawlessly. Contact us to discuss your translation needs and we can help you communicate with billions of Chinese speakers.