Halloween and Worldwide Celebrations of the Other Side

How to Optimize your Video for a Global Audience 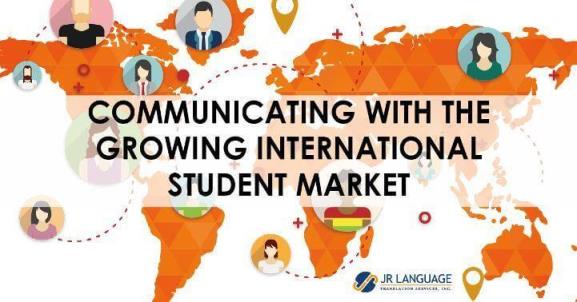 Students come from as far as China, and as close as Canada; flocking to study in the United States for many reasons. Some come to take part in research, some come for athletics, and others come to take advantage of high tech campuses featured around the country.  While there are many different reasons students come to America, one thing is certain: The United States is the world’s top destination for higher education.

As the number of students has increased, so has the need for translation services to help them achieve their goal. Picking a college or university often is a family affair, and although international students may be comfortable with English, other key decision makers in their family may not be. Universities and college’s ability to have their marketing material translated into different target languages is a crucial element in attracting students from abroad.

Not only is having material translated important, but it is also critical to translate into the most effective languages. The online marketplace is a great system for educators to reach out to prospective international students without having to travel long distances to foreign countries. However, marketers must be aware that to reach 90% of the online marketplace, it is necessary to translate into 14 different languages. Arabic, Chinese Simplified, Chinese Traditional, Dutch, English, French, German, Italian, Japanese, Korean, Portuguese, Russian, Spanish, and Swedish are all target languages to consider when consulting with a translation service provider.

Another important element to consider is where the bulk of international students are coming from. Students from China, India, and South Korea make up a large percentage of international students, combining for more than 500,000 people. For reference, that is a population greater than Miami. If a college or university were to consider using a language service in the future, then Chinese Translation, Korean Translation or Indian language translations would be excellent places to start.

As the importance of a quality education continues to increase, it is likely that international students will continue to travel to the United States to study. If colleges and universities have not adapted to market internationally, they will have difficulty keeping up with other institutions that have taken the initiative to translate their marketing material to effectively reach out to prospective international students and their families.