Flint Crisis and the Power of Spanish Translation 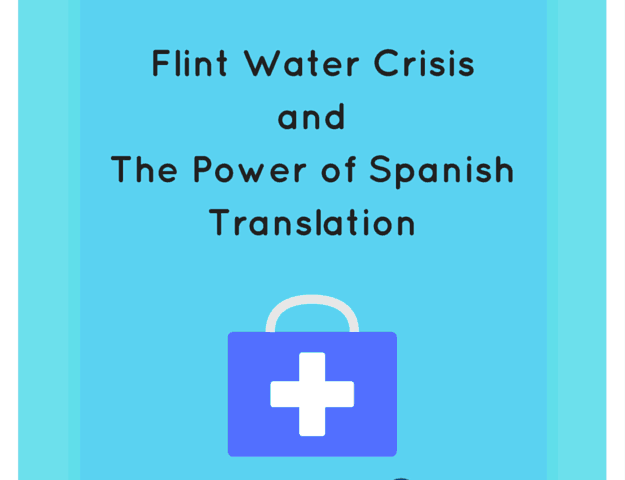 Flint Crisis and the Power of Spanish Translation

JR Language believes our translation services make an impact on our clients, not only in helping brands sell globally, but also in bettering the lives of individuals. Last week the tragedy in Orlando’s Pulse nightclub left Latino and Hispanic families reeling and in urgent need of language support through Spanish interpreters and Spanish translators.  Their services are being sought to help families heal by interpreting at counseling sessions, translating news updates and much more.

The need for Spanish translation as a means of well-being support is also relatable for Spanish speaking households in Flint, Michigan where the water crisis still affects families.

Early this month, concerns from Flint’s native Spanish Language speaking community made the news.  Speaking out about the struggles of the language barrier is 21 year old Margarita Solis whose parents have little English proficiency. “They always depend on me or my siblings, who do know how to speak English well”, says Solis.  Reliance on English and Spanish speaking children for translation is especially problematic during the crisis, due to the technical and scientific nature of some of the information being released. 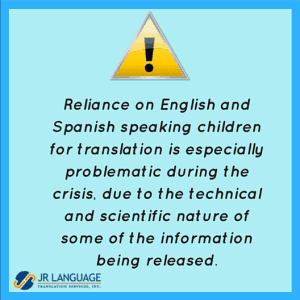 How have Flint’s Hispanic community gotten to this point?

“State officials said there are no Spanish language print media or radio outlets in Flint devoted to news.”

The consequence of not providing English to Spanish translation of public notices and documentation is being paid dearly by Spanish-speaking households, some of whom say that it had taken months for them to learn about the water crisis as well as the proper safety measures that needed to be taken.  To see the impact of the lack of such critical information in Spanish, read the personal account of 50 year old mom, Arendira Solis:

“I watch television news in English…I don’t understand exactly everything, but I do remember hearing there was something happening with the water…I was born..in Zacatecas, Mexico. Usually when there were babies in the house, mothers boiled the water, so I came [here] with that experience.  It never occurred to me that if you boiled the water the lead wouldn’t go away.”

Solis stopped boiling the poisoned water only after seeing local television ads showing an X over a pot of boiling water.   Later on, she was finally able to understand the severity of the situation through a series of Spanish billboards conveying similar information.

Some assistance is being provided to these households through local churches like Our Lady of Guadalupe where Spanish speaking volunteers distribute bottled water and filters to families.   There is, however, much more that needs to be done to reach the entire Spanish speaking population in Flint- which includes 4,000 Hispanic residents among the city’s population of 99,000.

“One of the challenges is getting the right information accurately translated…Sometimes the information is too technical, or it seems like whoever is doing the translation is using Google Translate, so it doesn’t make much sense.”– President of the Genesee County Hispanic Latino Collaborative, Juani Olivares on May 12, 2016

As a translation company, Olivares’s concerns are well known to us.  Whenever a client requests a Spanish technical translation, we assign it only to a skilled Spanish translator who specializes in working with technical related documents.  If machine translation is used, the translation still needs to be edited and proofread by a spanish proofreader.

Olivares’s statement also challenges us to think about how we demonstrate, in times of crisis, our care for the health of Non-English speakers.  Flint’s Hispanic households are valuable members of the community and with their health on the line, it is important to translate into Spanish all information that serves to protect their families. 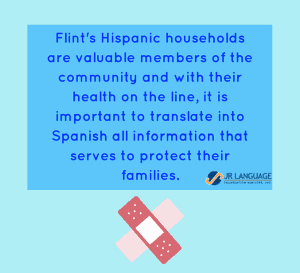 Discrimination comes in many forms and the lack of crucial information translated into Spanish only heightens the feeling of loneliness and uncertainty that Hispanic families are going through in this crisis.   Through their accounts, we see the huge impact that would have been made on their lives if only they were provided critical information in the Spanish language in a timely manner.

One of our most requested services is translation from English to Spanish, a trend that does not surprise us due to the growing number of native Spanish language speakers in the U.S.  We’d like to acknowledge organizations like Our Lady of Guadalupe, who recognized language and cultural barriers early on and took steps to help families in need by providing them with supplies and information in the Spanish language.

Outside of Flint, there are many other Spanish speaking groups around the world who are trying their best to live in regions where their native language is not spoken.  These people need to be kept informed in regards to their wellbeing and safety just like all other citizens.  We all need to show respect for their lives by making sure that content that has been professionally translated into Spanish, is readily available to them.