When Not In Rome, What do I do?

Why Should Scientific Research be Translated?

What if you could unlock critical insights and breakthroughs of scientific research through English translation?

The answer, based on recent research conducted by researchers at Cambridge University, might lead you to believe this is an exciting possibility.  The research team, lead by zoologist Tatsuya Amano, surveyed Google Scholar for scientific research relating to biodiversity conservation and found that of over 75,000 works, about 35% were not in English.  The breakdown of this portion follows:

Translating this 35% could open up a new world of scientific discoveries that could change the way we view life on Earth and how we study it.  Left untranslated, we could very well be overlooking important work which in turn can lead to skewed data results and biases in scientific understanding.

Overlooked discoveries as a result of not translating scientific documents are not the only aspect of concern we should consider.  People’s health could be at risk as well.  We’ve written about the necessity of medical translation supporting Global Outbreaks our blog post Medical Translation Supporting Global Outbreak.  Now, it is evident that scientific findings related to outbreaks must also be translated in a timely manner.

We all remember the deadly outbreak of avian flu (H5N1) throughout Asia, back in 2004.  In January of that year, Chinese scientists reported in their studies that the virus had begun infecting pigs which could allow the virus to be transmitted to humans.  This urgent finding was not made known outside of China until August of that year, when the U.N and World Health Organization learned of the results of the study and rushed to have it translated. 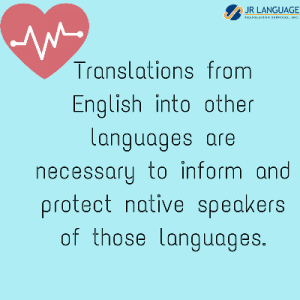 When global medical emergencies arise, all related scientific and medical research findings need to be translated into English as soon as possible so that people in predominantly English speaking countries have ample time to absorb the information and develop a well thought out plan of protection.  The reverse holds true for research findings originally published in English.  Translations from English into other languages are necessary to inform and protect native speakers of those languages.

Researchers and policy makers often rely on scientific works to assist in their own work, making accessibility of such information critical.  Native English speaking researchers and policy makers should have ready access to scientific documents translated into English, and native speakers of other languages should have access to documents translated from English into their native language.

A lack of availability of translated documents has made professional work difficult for individuals in director positions- an issue evidenced through further research done by the Cambridge University research team.  Out of 24 conservation directors in Spain surveyed, 13 conveyed that the language barrier made their jobs more difficult because it limited their access to information related to their field.  Think about how much easier their jobs would be, had Spanish translations of documentation been available to them!

The study of science is a global endeavor, and involves valuable contributions of research written in all languages.  Overlooking research due to language barriers can result in duplicate research efforts, biased conclusions and preventable endangerment to our health and environment.  Unlocking language barriers through scientific document translation helps make more scientific information accessible.  And, the more we know the better we can understand our world and help its population.

JR Language is proud to have had years providing translation services for organizations within the scientific field, including medical translation and translation of research and surveys.  We invite you to talk to us about your scientific translation needs, today!