All About Multilingual Subtitles and How They Can Help You

Defining Simultaneous Interpretation and Why It Can Help You 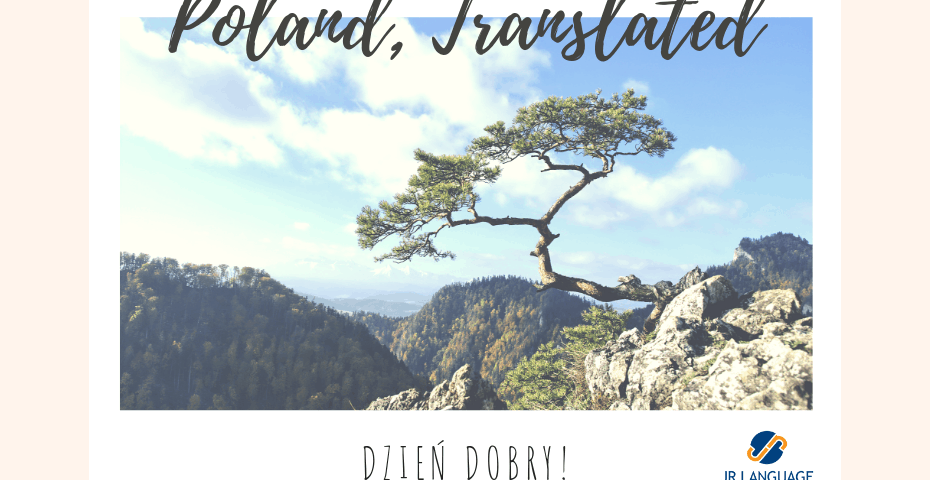 A Glimpse into Poland and the Importance of Polish translation

Poland is a fascinating place, with a great depth of history and vibrant modern culture. I had the opportunity to spend a week in Poland recently, and want to share what I found as well as some facts about the Poland of today. Common questions about Poland include: Is Poland friendly to tourists? How do you immigrate to Poland? Should I sell my product in Poland? Should my business use Polish translation? We’ll look at answers to these questions and more, with resources to make you szczęśliwy- that is, happy.

The Face of Poland

Poland, or Polska, is a country of velvety lowlands, snow-capped mountains, and thick forests. It enjoys a relatively temperate climate compared to some of its neighbors and is rich in natural resources, including lumber, amber, and minerals. Officially named the Republic of Poland since 1989.

Poland’s vistas are dramatically different depending on where you are. I spent most of my time in Krakow and then Warsaw, which are perfect examples of Poland’s varied look. Krakow was spared most of the bombardment of WWII, so most of the old town is either intact or restored, and large pieces of the original city walls are still standing despite being several hundred years old. Warsaw, however, was torn apart. Most of the buildings I saw were sleek and modern, when they weren’t long, plain, and built during the time of Soviet dominance. In Krakow the streets are narrow, and the many-colored buildings shoulder in close to one another like birds in a nest. In Warsaw the view opens up, the streets shine with cars, and the sidewalks buzz with cyclists and conversation.

What to do in Poland

One week in Poland is not nearly enough to explore it properly, but I will share some of my experiences.

The United States Embassy and Consulate in Poland maintain a website filled with information to help travelers, on subjects from what getting a visa entails to fraud protection tips. They provide a link to the Polish Ministry of Justice, which keeps a searchable compendium of translators for your translation and language service needs. As I came from the United States and stayed briefly, I only needed a passport.

The Polish people are very welcoming and helpful to strangers. They have an air of calm self-possession and show genuine good humor at even the worst attempts to speak Polish. Nearly everyone spoke at least a little English, and I was able to get by with my limited vocabulary: Good morning, thank you, yes, no, pardon me, and a few other basics. If you are polite, not too loud, and don’t take up more than your share of space, you will not have a hard time making friends. Everyone I met was happy to share insights on where to go, what to see, and what to eat and drink while there.

Given the widespread English proficiency shown by the locals, it was not surprising to see that there were relatively few translation errors that I noticed. The few that popped up showed an interesting pattern, in that it would be a word that sounded similar when spoken, but had a different spelling and meaning. For example, a menu offered a “desk” of cheese, when they likely meant “disc.” A museum placard spelled “witch” when the context indicated “which.” Perhaps the translator that took the menu from Polish into English knew English better by ear than when written.

Unsurprisingly, the dominant language of Poland is Polish. Aside from English, the other top languages are German, Silesian, and Kashubian. Silesian and Kashubian are West Slavic dialects with influences from Germany and old Prussia. The Russian and Romany languages have footholds in Poland as well.

Many people in Poland have mastered the English Language, in general, they recognize the importance of languages to communication, creating rapport and generating business. Many of them learn other foreign languages, including German, Russian, French, and Spanish.

The takeaway? If you like to travel and have never considered visiting Poland, I recommend adding it to your list. Poland presents opportunities on every front, so let’s get into what some of those are.

Poland has a negative immigration rate of –0.4 individuals per 1,000 as of 2017, indicating that more people are leaving Poland than are coming in. Still, the number of people coming to stay was over 250,000 in 2016. The largest portion of immigrants to Poland come from Ukraine. The Polish government has been expending much effort to repatriate Poland’s lost citizens, displaced during wars and other conflicts.

Poland’s Ministry of Foreign Affairs website details the rules of entry to the country. Since 2007, Poland has been part of the Schengen Area, a region in which you will not need a visa to cross borders, provided you plan to stay for fewer than 90 days. This region includes 28 countries, such as Australia, Costa Rica, the United States, and South Korea. If you plan to stay in Poland for any significant length of time or would like to live there, the Ministry of Foreign Affairs is a perfect place to learn exactly what you’ll need to have and do.

The website for Poland’s Ministry of Foreign Affairs is in Polish and is also translated into English to provide English speakers with access to information concerning matters like doing business in Polland, visiting Poland and certification of documents -Apostille.

I mentioned earlier that Poland sees a lot of movement by its people and visitors. Much of that is because Poland has a large student population who often go abroad to study and may or may not return. Poland also sees foreign students entering the country to study in the 500-plus universities available, many of which are technical schools training the next innovators in science and technology. Multiplicity of language is prized, with some universities teaching endangered or extinct languages, like Nahuatl, spoken by the Aztec Empire. We can see that by encouraging diversity of language and strengthening its industries, Poland is becoming more powerful.

If you plan to study in Poland there is a chance you will need English to Polish translation services for documents like birth certificates, diplomas, and resumes. Be sure to ask the receiving institution if you need certification of your polish translation.

Doing business with the Polish is an exciting prospect, whether you plan to open up a physical location or keep your presence online. Poland is currently Europe’s 6th largest economy, bordering on several European Union states including Germany and Lithuania, with destinations like Berlin and Prague a short flight away. In 2016, Poland’s GDP totaled $471 billion, with leading exports of auto parts, computers, and electronics, and top imports of machinery, mineral fuels, and plastics. Poland currently stands as the 23rd largest export-based economy in the entire world, with most goods going to Germany, the Czech Republic, and the United Kingdom.
An increasing number of Poles, especially young adults, are working and studying abroad. A good education and language skills are highly employable qualities. If your business wants a strong presence in Central Europe, use Polish translation services for your materials. With well-educated, highly mobile Polish-speaking professionals in your contacts, your brand has an opportunity for strong partnerships and a greater sphere of influence.

Don’t be a Stranger

Language is the means by which we communicate our thoughts and ideas to each other. The Polish appreciate those who speak plainly and act with consistent integrity. If you make the effort to see that your business materials are translated accurately into Polish by a professional translation agency, your prospects will be much more likely to open up to you. Localization services ensure that the content is culturally relevant and relatable, and a translation agency can provide guidance on the best procedures and courses of action for your particular English into Polish or Polish into English content.