Communicating with clients in Los Angeles may require translation

Getting A Big Piece of the Pie Through Spanish Translation

The constant influx of Latinos from different countries to  America brings with them a variety of Spanish dialects that American companies must adapt to in order to communicate effectively with these new potential clients. Spanish language content creation requires the diligent efforts of Spanish translators and copywriters who are well versed in the variations of each dialect. 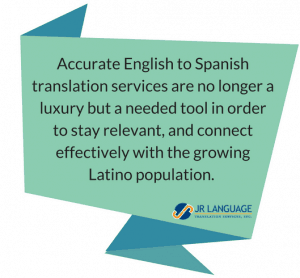 Effective communication ensures that companies get a “piece of the pie” in the ever-changing American economy. American companies have no choice but to adjust to this shift in order to stay viable and relevant. Accurate English to Spanish translation services are no longer a luxury but a needed tool in order to stay relevant, and connect effectively with the growing Latino population.

How To Start Communicating Effectively

Effective communication can be simply put as two or more parties exchanging a message unadulterated, and conveying the intended message clearly, without errors or embarrassing situations.

Of course we have all experienced the proverbial “miscomm” in social settings. These encounters have likely led to:

In a business setting, miscommunication can lead to:

The Importance of Perception and Dialects in English to Spanish Translations for Latinos in the U.S.

Being perceived as culturally clumsy or worse, being caught making unforgivable grammatical errors in ads, sends the wrong message to customers, business partners, and even employees. Not being careful in your translation process will more than likely result in losses for well-intending businesses who simply wanted to capture a new market segment, while keeping costs low.

The reality is that nationwide companies will encounter different Spanish speaking demographics and they must be ready in order to ensure excellent marketing and customer service.  Because of this, simply translating into Spanish without attention to details or the intended audience- will not do. 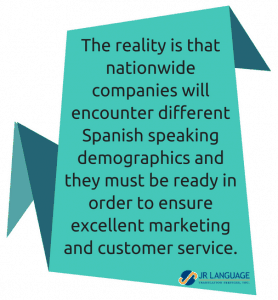 This can even happen in the microcosm of cities such as New York City. Such is the case with Lucy Smith:  Lucy Smith is the new Spanish Customer Service Representative for a new department store named “La Beautiful” in Washington Heights.  Lucy assured her manager Cathy that she was a proficient Spanish speaker.  Cathy thought that because she was able to speak Spanish she could be a translator and an interpreter for that store and for the company.

Cathy is married to a Puerto Rican man who has lived for 30 years in New York USA, and even when bringing her husband Diego in, they found that she had a “good” command of Spanish so they hired her, trusting they made the right choice.

Cathy thought using Lucy was a great solution for catering to Spanish Speaking customers and solving logistic problems when giving translated instructions to Spanish speaking employees.  She jumped quickly into using her new resource to translate and record Spanish video training for the employees, and to create Spanish signage for customers around the store. Unfortunately, Lucy was not a Professional translator and she employed some words in the videos that were inappropriate for a Mexican audience.  Employees around the warehouse alerted HR that something was wrong since some Mexican employees were perplexed and even laughing after viewing the training videos.

As it turns out, some of the words Lucy used were not appropriate for a Mexican audience, even though they were colloquial words in Puerto Rican vocabulary. You can land into murky territory when referring to something as simple as a jacket, or a hole in the wall, or even the cap on your head, when you pick wrong vocabulary without research while trying to reach a different Spanish speaking country or audience.

“Chaqueta” might be considered an offensive term for Mexicans!

Even though Lucy may have aced all her Spanish tests in High School, this does not necessarily ensure that she can deliver proper Spanish translations of signage or training videos in Spanish for a general Spanish Speaking audience. Unfortunately, while trying to save money, Cathy forgot about the melting pot of Latinos in the USA. This case shows the importance of being careful, appropriate and especially neutral, in considering the best selection of words to include in Spanish content.

The case is also a situation that we have seen repeated many times in the real world in which by choosing the wrong person for a good idea, the effort was turned into a waste of time and money, when they were trying to save money in the first place. Translation is not an expense but rather an opportunity to communicate well with other customers that can open the doors to a new market. 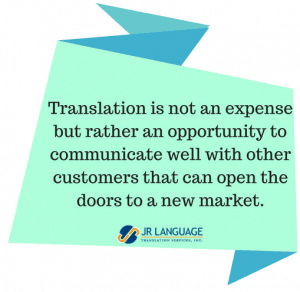 Seize the opportunity! Use professional and experienced translation companies to execute your Spanish projects to assist you in attracting one of the most diverse growing market segments in America.