The Roar of Online Retail

German: One of the Top 5 Language Markets 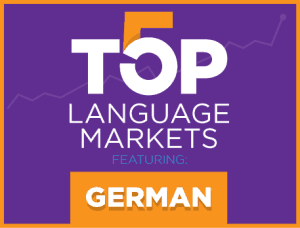 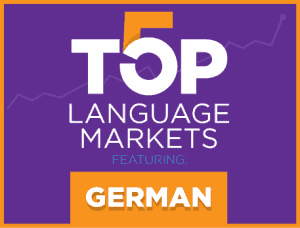 When a client reaches out to us to discuss a translation project, one of the first questions we ask is: Who is your target audience? If your marketing strategy involves targeting a large portion of the European market, researching the German-speaking demographic is a great place to start.

Why the German Language?

The strong online presence the German language holds is fueled by the widespread use of German as both a native and secondary language across Europe.  On the worldwide web, the top-level domain name “.de” (the official domain name for Germany) is the second most popular, behind “.com.” This is not hard to believe, considering 86% of the German-speaking population uses the Internet.

German language interest is growing quickly in unexpected places including China, India, and Brazil.  In fact, today 68% of all Japanese students study German!

What’s driving this fascination with the German language?  The answer lies in part with Germany’s economic strength.  It is the largest economy within the European Union, and the 4th largest economy worldwide.  German companies consistently dominate different sectors of the global market through companies like Volkswagen, Bayer, Siemens, and SAP.

German social-linguist Ulrich Ammon said it best, “The world knows that the [European Union] is economically dependent on Germany and that Austria and Switzerland, which are also German-speaking, are also flourishing economically….That gives the impression that learning German will give you access to countries that flourish economically and offer good opportunities for business or for a career.”

It may not be necessary for you to become fluent in German, but reaching out to the German demographic through German translations will land you lucrative opportunities in a wide variety of industries.  Here are a few opportunities where you can leverage German translation services to help establish a successful professional relationship:

German Shoppers are Buying Outside of their Homeland

B2C (Business to Consumer) Ecommerce is flourishing in Europe, with Germany currently being one of the most active import and export countries in the world.  Each year, the data looks more and more promising for e-retailers outside of Germany targeting the German market.  Let’s take a look at the numbers below:

What a great time to begin doing market research on this valuable demographic!  Once you better understand German consumer behavior and preferences, your next step is to plan German translation projects for your website and marketing material.

The importance of translating your marketing material cannot be underestimated.  It may be easy for us as a translation company to declare the benefits of website translation, but they are well supported:

Are you willing to invest the time and resources to take advantage of the German market?  German Website Translations and German Marketing Translations will help get your brand, products, and services to the German demographic!

A Prominent Language in Science

Germans are responsible for many of the world’s greatest inventions and scientific discoveries.  Germany is home to 80 Noble peace prize winners in physiology, medicine, physics, and chemistry. Volkswagen, a global giant of the automobile industry headquartered in Germany, was named the top R&D (Research & Development) spender of 2015.  The company has been among the top 20 R&D spenders every year, since 2005.

United States is Germany’s most prominent partner in scientific and technological cooperation.  Each year, scientists and students from Germany and the US travel to each other’s country for study visits.  This results in a high volume of information exchange through frequent scientific research collaborations.

Relationships within the German Marketplace

At JR Language, we assist our clients’ communication efforts with the German audience.  Whether through German marketing translations, German website translations, scientific, or technical translations, we can help you to reach this valuable demographic.  Contact us today, to learn how  German translation services can be implemented into your marketing strategy.