Connecting Your Brand with the Fast Growing Hispanic Market 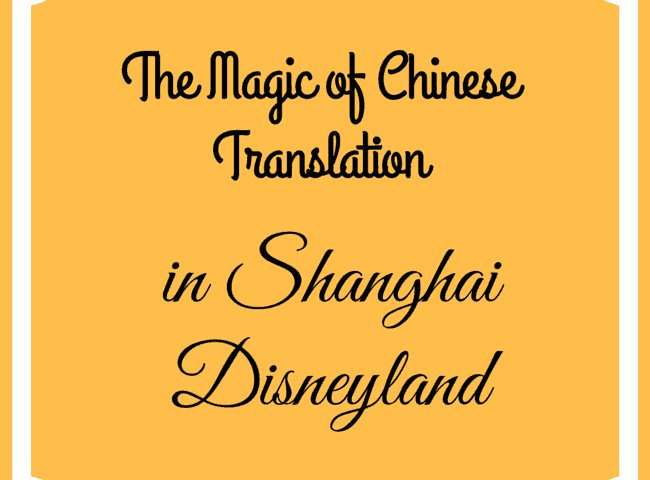 “I never thought I’d hear the Seven Dwarves song “Heigh Ho” sung in Mandarin!”  laughed my father one morning as we watched a news anchor give a tour of Shanghai Disneyland.  I smiled at that, but having worked at a translation company for several years I couldn’t help but think – it’s about time!  I thought of my relatives in Taiwan who’d be thrilled to travel to Shanghai to experience the magic of Disney in their native language.  As shown in the video above, beloved Disney tunes playing throughout the resort have been translated from English into Chinese (Mandarin).  Furthermore, character dialogue coming out of the animatronics has been translated into Chinese as well.

Reaching the Chinese audience has been rising in importance for Disney.  A significant part of growing close to that audience is to connect with them through the Chinese language, and Disney has made special efforts to do so in designing the Shanghai Disney resort. 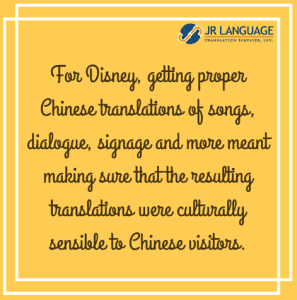 For Disney, getting proper Chinese translations of songs, dialogue, signage and more, meant making sure that the resulting translations were culturally sensible to Chinese visitors.  As stated by a writer for the Disney theme-park design group, Fangxing Pitcher, “Every time we come up with a name, we had to make sure it has a whimsical Disney feel, it resonates with Chinese people and it conveys what the experience is….If you just do a straight translation, all of that gets lost.”  The process Pitcher described is Chinese localization, and Disney made a point to hire Chinese cultural experts, Chinese designers and even Chinese comedians to ensure that all Chinese language translations were localized successfully so that famous Disney phrases, puns, and character names could be well received by Chinese visitors.

Disney has also sprinkled the magic of Chinese language translation upon a “Frozen” sing along celebration, and a stage production of Lion King.

As a translation agency, JR Language is impressed with the efforts Disney has made to make the Shanghai Disneyland resort as culturally targeted to its visitors as possible.  We know that the process of Chinese translation and localizing can be a challenging one, but when done well- it is rewarding.  Disney is experiencing this – since its opening less than a month ago, Shanghai Disneyland has already received nearly a million visitors.