Detroit Translation Services are busier than ever.

The Value of Spanish Translation is Nothing New

The 2016 battle for the highest seat in the land has been unique, to say the least. As Democrat, Independent and Republican parties use the media, we find one facet of particular interest. Regardless of political views, as we come to the summit of the “political season”, one group which remains of keen interest to all parties is the Mexican and Latino population of the United States.

With those of Latin descent a consistently growing part of the American fabric, it’s important to look back on the historic significance that early American Politics placed on having a mastery of their root language. Beginning with the founders, the importance of Spanish Language is nothing new, today.

Before serving as the third president (1801 – 1809) of the United States of America, Thomas Jefferson fulfilled another key political position as the 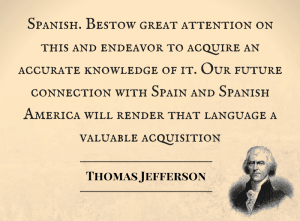 first Secretary of State (1790 – 1793). The year prior, Jefferson established the Office of Language Services. This prestigious office continues to serve the government today, by facilitating communications with non-English speaking governments.

In 1787 Thomas Jefferson wrote:
“Spanish. Bestow great attention on this and endeavor to acquire an accurate knowledge of it. Our future connection with Spain and Spanish America will render that language a valuable acquisition.”

As Jefferson assessed the geo-political landscape of his time, he foresaw the importance that Spain held among its European neighbors. America’s ability to grow, travel and become a player in global trade would be influenced by our nimble communication. In addition, much closer to home was “Spanish America” with whom the newly formed United States would have much contact. Ensuring the ability to negotiate trade and discuss other matters of state with close neighbors was of utmost importance then.

How much more important now with the appearance of globalization and the speed of technology that makes the world smaller, and communication fast and relevant. With millions of Spanish speaking Americans within the borders and close by, how we interact together has only become more important. As our methods of communication grow in reach and speed, we find that the importance of accuracy and fluency in Spanish and other languages of even greater value. Whether espousing political views, sharing cultural events or comparing our wants as consumers, every action we take hinges on the ability to accurately communicate. Spanish Translation and Spanish Interpretation is taking a center stage as Jefferson was able to predict.

In order to reach the Spanish speaking audience for politics, commerce, science or simply casual contact, Professional Spanish Translation Services forge a sturdy bridge. And although online applications may provide instant gratification for word translation, they don’t factor in Spanish culture and nuance. When speaking with another person face-to-face, we all understand HOW something is said is just as impactful as the words themselves.  This becomes even more important in the written word.

Professional Translation Services In Demand For Variety of Industries

Document translation for product directions and medical information; Website content, including website images, and even deeper services such as multilingual web development and Spanish SEO; On-screen video translation. All of these are methods used everyday by those in commerce, science, education and (yes) politics. Capturing and translating the provided text is one thing. Communicating the intended meaning into another language and culture requires mastery and relevance.