Translation Services Needs in the City of Chicago 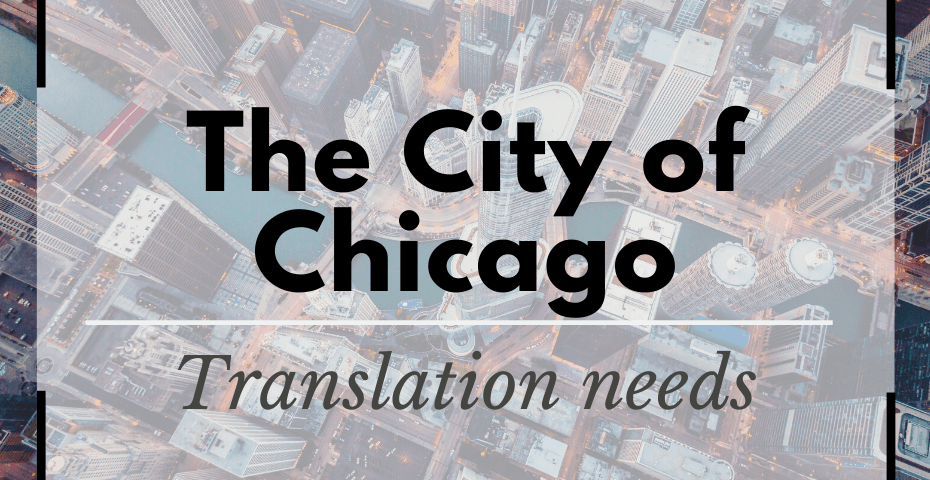 The need for translation services in the city of Chicago

Blown Away by Chicago

Chicago, Illinois is a city of action. With a population of almost three million, the Windy City never stops trading, communicating, connecting, and swapping ideas. Regarded as the city for investors by IBM’s yearly report on world trade locations, Chicago has no shortage of opportunity for the business looking for an international and multilingual presence. Thousands travel to and from Chicago every day, carrying with them information that will power tomorrow’s economy. How can your business make an impact in the Greater Chicago area? Language translation services are a perfect place to start.

Companies based in Chicago extend their reach abroad into 170 countries and thousands of locations among them. Language services for their vendors, partners, and employees is one way they accomplish and maintain profitable relations across nations. Translation service companies make conducting international business possible by not only translating between languages but by localizing a company’s message to local cultures. Legal document translation is important to make sure that a business’s practices line up with the local legal system so that licenses, patents, and contracts will be clear and accurate.

Some nations with commercial ties to Chicago are:

In the greater Chicago area, which is home to almost 8 million inhabitants, English is the dominant language, followed closely by Spanish. Arabic, Polish, Chinese, and Tagalog are also spoken in communities around Chicago, with some neighborhoods showing a high concentration of speakers. Within city limits, about 30% of Chicago residents speak a language other than English in their private lives. Spanish is the most common language next to English, but demographics vary widely depending on the neighborhood.

In Chicago and its surrounding areas, immigrants form an essential part of the human capital available as business owners, taxpayers, shoppers, and community members. Recent estimates place immigrant-owned businesses at 20% of Chicago’s commercial makeup. Your business will miss out on a huge portion of Chicago’s buying power without using professional translation and interpretation services. Best of all, businesses and communities that share a language or culture talk to one another. A Chicago business that reaches out to a community with professionally translated ads, web pages, and documents shows expertise, courtesy, and sincerity, something that will not go unnoticed.

Verbal translation or interpretation is another important aspect to consider in Chicago. Whether it is an important business meeting with a partner who does not speak English, a medical appointment with a patient who speaks a different language, or simply showing a client around town, utilizing a professional interpreter can be vital to success.

Whether it be a consecutive or simultaneous interpretation, JR Language Translation Services in Chicago provides trained and professional interpreters that are prepared to assist in various settings and meetings.

Even if someone also speaks English, they most likely prefer to shop and conduct business in their native language. If your company offers products and services translated to that language and localized to their culture, your company will be much more attractive to the multilingual population. Word of mouth is still the most powerful form of advertising, especially in this digital age where communication across thousands of miles is instantly available. How can your business become popular among Chicago’s multilingual population? We have a few ideas:

Using a professional translation agency in Chicago prevents mistakes that waste time and resources while producing accurate, localized results. This improves your brand image and opens your circle of influence to thousands of new customers and partners. Using professional translation services also improves the inner workings of your business by encouraging the use of clear, concise language free of vague terminology or words easily confused for others. Contact JR Language for a consultation and find out how your business can reach beyond Chicago to the world.