The Importance of Transcription Services for Multilingual Communication

Celebrating 2020: The Chinese Year of the Rat

A look at Translation Services in Boston 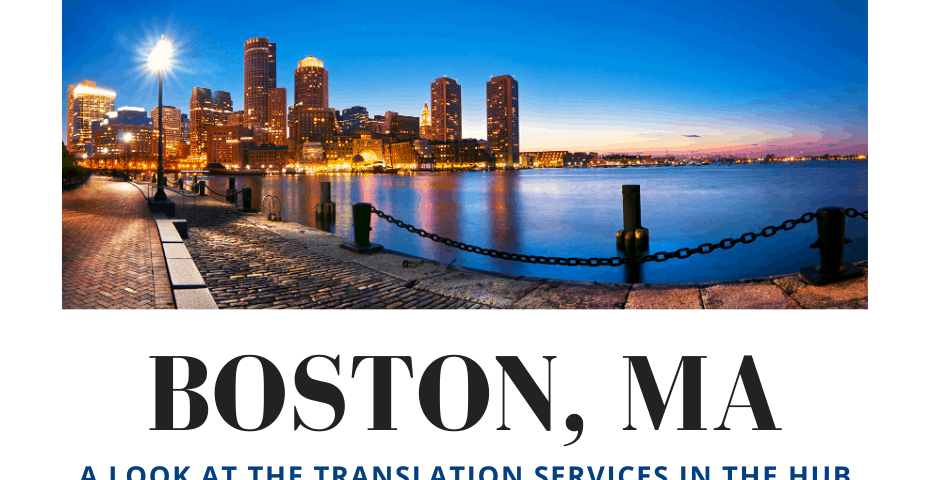 Boston: An Old City with a Young Face

Boston, Massachusetts, is a thriving center of industry, arts, science, and education.  One of Boston’s many nicknames is “The Hub of the Universe,” or just “The Hub.”  Boston is a vital connecting point for all kinds of domestic and international trade, and language services form connecting points between each language spoken by individuals and businesses.  What languages are spoken in Boston?  What kind of translation services should your business use for Boston?  Let’s find out.

Boston boasts many firsts in its history.  One of the oldest cities in the colonies that would become the United States, Boston founded the nation’s first public park, Boston Common, all the way back in 1634.  A year later, the first formal public school in the North American colonies, Boston Latin, was established.  Multiple world-renowned universities call Boston home, including Harvard and MIT.  Boston has set precedents for public transport by installing the United States’ first subway system, and improved standards of urban planning by filling its streets with tree-lined bike and footpaths.

With Boston being such an old and storied city, it is no surprise that immigration and international trade have played a huge role in its development.  According to the Boston Globe, immigrants have been the primary drivers of Boston’s population growth in the last few years.  Without them, the city’s recent population growth stats would be negative figures.  It is no secret to Bostonians that international newcomers bring with them new intelligence, culture, and buying power.  With visitors and new residents come their languages and dialects, so Boston is a prime place for professional language services to be used to great effect by businesses and institutions.

The city of Boston is home to over 660,000 people, but as many as 5 million reside and do business in the Greater Boston area.  Latin people make up most of the recent population growth, with some estimates taken since 1980 putting them in the 90% range.  The majority are native-born.  Most foreign-born Latin people coming to Boston hail from The Dominican Republic, Puerto Rico, El Salvador, Mexico, and Colombia.  The Latino and Spanish-speaking population possesses untold amounts of skill and buying power.  With professional English to Spanish and Spanish to English translation and interpretation, your business can reach this strong, dynamic market in a way that will please both.  Our professional translators can help you navigate the Hispanic market by selecting the correct dialects and localizing your company’s materials, from website translation to legal document translation.

An interesting dichotomy exists when discussing Boston’s immigrant population.  While Latino people are the most numerous newcomers to Boston, with most being native-born, they are not the largest contributor of human capital from areas outside the U.S.  Most new foreign-born Boston residents come from China.  Chinese Bostonians, like most shoppers, prefer to shop using their native language online and offline.  A professional translation agency can help you offer exemplary service to the Chinese community with accurate translation and localization according to dialect and culture.

Apart from English, Boston speaks Spanish, Chinese, Russian, French, and Haitian Creole.  However, English still dominates the linguistic scene.  This makes language services all the more necessary, as English speakers who want to reach a multilingual market need to do so in a way that resonates with that market.  In the same way, multilingual individuals and businesses with interests in Boston need English translation services to suit their message to the English-speaking cohort.

Fortunately, Boston is a city full of language education.  The University of Massachusetts’ Boston campus maintains a strong linguistic program, with courses available in Chinese, Japanese, Arabic, German, and more.  The Boston Area Spanish Exchange, or BASE, is a school centered on Spanish language skills.  The International School of Boston focuses on the French and English languages, as well as culture.

Currently, the state of Massachusetts does not require languages beyond English to be taught to high-schoolers, but that is changing with help from groups like the Massachusetts Foreign Language Association.  Students in the Boston public school system speak over 70 languages including Tagalog, Malay, and Cantonese.  These students will take their linguistic skills with them into the public sector, making Boston and the Greater Boston area even more cosmopolitan.

Your business can’t afford to miss out on international and multilingual customers when doing business in Boston.  Website translation is a perfect place to start.  Ecommerce is one of the foremost ways businesses make themselves known to their client base, and an easy online experience is a must for your business to be seen favorably.

For best results, prepare as much as possible to give to your translation company.  Keep your source files and plan ahead to devote proper time to the project.  Write toward translation- keep your language clear and straightforward, without idioms that muddy the waters.  This also saves time.  Working with a professional translation agency in Boston not only ensures that your material is translated and localized accurately, but it also helps you acquaint your business with the needs and goals of the markets you seek.