Happy Labor Day to all Translators and Interpreters!

The Hispanic Market is Changing : Stay Tuned to Connect! 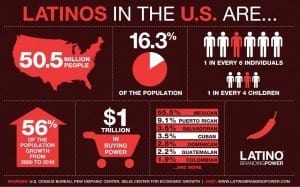 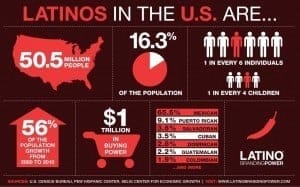 It is not a secret that the U.S. Hispanic community is growing, as predicted in 2000. Being the only sector of the American population with growth of 2.5 (Replacement Value), according to the U.S.Census, Hispanics are the largest and fastest growing minority in the United States. As a consequence, the younger generations of Hispanics are an appealing target audience that will boost the consumer base of any product or industry.

We would like to share some statistics that will illustrate the allure of this segment for the American and global market:

By the end of 2011, the Association of Hispanic Advertising Agencies’ report indicated “consistent investment on Hispanic marketing (15%) and high levels of overall top-line revenue growth.”

Evolution in technology and diversity of platforms, particularly in social media and Internet, are giving new challenges to Hispanic media users, prompting Spanish-Language TV networks, magazines and advertisers to hone new skills to connect and stay in the radar of the Hispanic population according to the decisions and patterns these users exhibit.

Building on Strong, Tight Knit Networks in the Hispanic Community

In this line, it seems that “relations are extremely important for Latinos online and studies reveal that, especially in purchasing decisions, friends’ recommendations precede other factors in decision making due to the fact that Latinos revolve around tightly knit networks.” As a consequence, relationships built with Hispanics have more potential to subsequently drive more traffic and business to your website and company. It might be worth it to capitalize on connecting with them through social media platforms.

According to HispanTelligence, the research division of Hispanic Business Inc., the cities that receive more advertising budget for  Hispanic marketing in TV, radio and print are (in order of importance):

Even though TV, radio, newspapers and, magazines are very important mediums to reach Latino buyers, significant growth of internet advertising investments in 2011 indicate that internet and social media are ready to be embraced as part of the Hispanic marketing plans, and that there is a good strategy in motion to transform it into an effective and efficient tool to target the Hispanic market.

Are you in tune with the changes? What are you doing or what would you do differently? We would like to read your comments.