English to Spanish translation a Critical Part of your Marketing Priorities

Translation a Key ingredient to Big Business in Mississauga, Canada 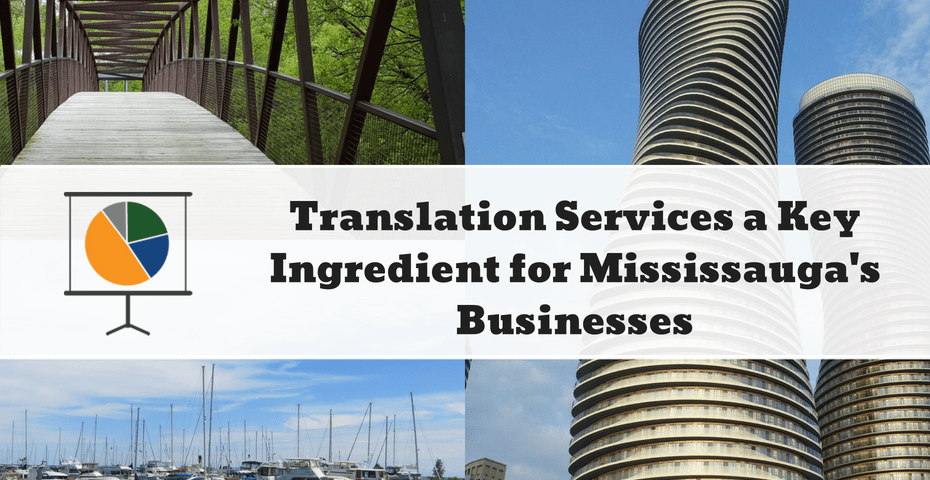 How 200 languages live and thrive while creating a dynamic economy

The most recent census performed in Mississauga, Canada found that though English was spoken by nearly half of the population, there’s an astounding diversity of other languages and cultures represented in the region. As the economy and industry seek continued growth, professional translation services in Mississauga also play an ever-growing role.

After English, the next most spoken languages in Mississauga are Urdu (4.9%), Polish (4.1%), Punjabi (3.2%), Arabic (3.1%), Tagalog (2.8%), and Portuguese (2.5%). Even though the percentage is small, the diversity of languages is an indicator of people coming and immigrating from across the globe to arrive in Mississauga. This city in Ontario is a melting pot of languages, cultures, and traditions exemplified in the variety of food and restaurants found.

As you can see, even those groups are comparatively small. All of which means the remaining languages have immigrated from across the globe to arrive in Mississauga. Overall, these languages and percentages include:

Mississauga A Home for Fortune 500 Companies

Among Fortune 500 companies, more than 60 have either their Canadian or Global headquarters in Mississauga. Some of the strongest industries represented include pharmaceuticals, banking, and finance, electronics, computers, and aerospace.

Employers include such giants as Roche Pharmaceuticals, Citi Bank, Mitsubishi Heavy Industries, Polaris Software Labs and Baxter Corp., among others. As they employ tens of thousands they also partner and contract with over 2,600 manufacturing companies in the area. That type of interaction requires a lot of support and clear communication to fulfill orders. With employees, partners and clients around the world, it is clear that professional translation services are a need among the companies in the area.

Delivering the highest standards of service in Pharmaceuticals, Banking, and Heavy industries require training a diverse pool of employees as well as communicating with an equally diverse customer base. At the Citibank center alone, employees represent and speak more than 200 languages. Interacting with even half of that type of those languages would be quite a feat!

Document translation for employee agreements, employee handbooks, and training videos are a few of the primary needs for professional language translation agencies. Accurate and relevant translation is used to train manufacturing and production staff, which helps to ensure business and industry continue to thrive in Mississauga.

For non-English speaking customers, translation plays a unique role in the buying cycle. Directions for pharmaceutical use, product ordering on the internet and instructional documents that are packed directly with products are practical and every day uses for translation services. In other areas such as Real Estate and small business, translation is used for contracts, buy and sell agreements, and handling standard identity documents for those immigrating to the region.

The only “constant” is “change”. According to Mississauga.cc, the projected 10-year demographics infer that notable shifts may be taking place in the city’s labor market. The role of women, racial minorities and those with disabilities are expected to comprise 70% of the workforce. As many of these can be expected to include immigrants, the services of a professional translation company for employers are expected to play an ever-growing role in the next decade.