How to Get the Most Out of Your Translation Services Project 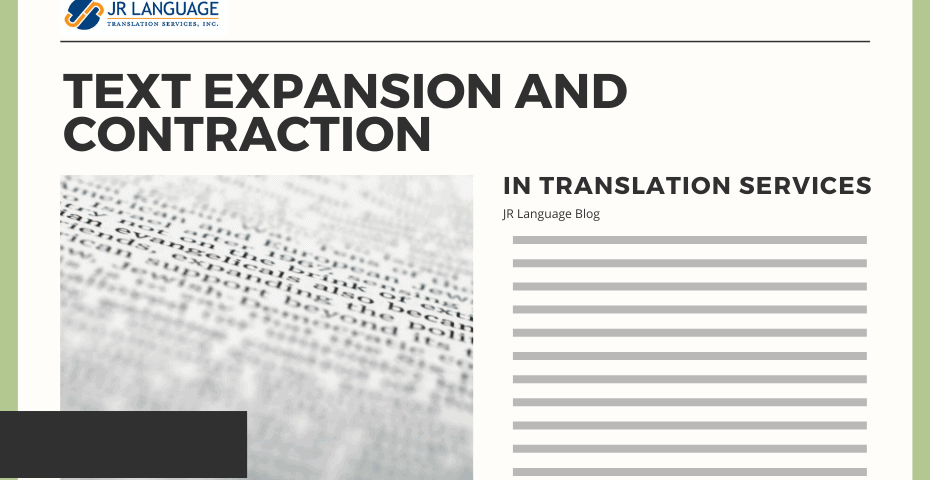 Imagine your company has invested in a new marketing campaign. It’s been months in the making; the ad copy, the design, and the approval process. But after the document goes through Spanish translation, your designer begins the desktop publishing step before sending the document into your international market, and the copy no longer fits!

When written text is translated into another language, it’s common for the length of the document to change. This is called text expansion. But unexpected text expansion is a situation no business wants to find themselves in; with extra time and money spent on a campaign that looks dramatically different from the English version.

With proper planning and the inclusion of a professional translation agency, you can incorporate enough space in the design to accommodate text expansion from the start. Creating and designing your documents with translation services in mind saves time and hassle, while makes reaching international audiences easy.

What is Text Expansion in Translation?

It’s common for text lengths to expand or contract during the translation process because other languages may use more or less words-or in the case of languages like Japanese and Chinese characters-to express the same idea.

The rate at which language expands or contracts varies and depends mainly on what the source language and target language are. There’s no one formula for predicting expansion in translation due to the variety of variables, so it’s best to include a professional translation company from the start. A good rule of thumb is to know the longer a piece of text is, the less it will expand during translation. Conversely, the shorter a source text in English, the greater the rate of expansion will be during translation.

The subject of the text matters as well; whether it’s literary, technical, or a personal document such as a letter. Technical translations have specific and standardized vocabulary whereas literary translation allows more room for poetic interpretation.

English text, which is standard for many designers to use as a placeholder, is a compact language, and expansion is common in translations. Many eastern European languages take up to 20% more space on a written piece than English.

Spanish is a more complex language than English, so text expansion in translation is standard. English also has many abbreviations that don’t translate into other languages. FAQ becomes “preguntas frecuentes” in the Spanish translation, so if the design is centered around the width of the three characters “F”, “A”, and “Q”, there will not be enough room for the Spanish translation, which is twenty characters including the space.  The same can be said for German, where several words can be clustered together into one compound noun.

On the other end of the spectrum, languages like Chinese and Japanese use ideograms, where often a single character can represent a word or an entire concept and there are no spaces between them, so contraction is common in the word count while expansion is common in text height.

Unexpected text expansion can raise challenges for marketers, copywriters, and designers. But expanded character count isn’t the only problem to be aware of.

Text expansion can cause words or full paragraphs to cross bleed lines, leave designated columns, and overtake design elements. Text contraction can leave a document looking improperly balanced with too much whitespace. Flexibility in design is important for successful translation services.

Text expansion and contraction play an important role in considering and planning for design in multi-lingual websites, marketing campaigns, presentations, desktop publications, and any other forms of translated communication. Using a professional translation company like JR Language ensures the most accurate translation services and accommodations for text expansion from the start.

Since 2018, Victoria Wildow has put her problem-solving, technology-centered mind to use in her roles as a Translation Project Manager, Typesetter, and now Marketing Associate at JR Language. She is a graduate of the Rochester Institute of Technology’s Media Arts and Technology program. Victoria helps ensure our clients' various designs maintain the same look and feel in their new languages while also managing projects in various media. She loves learning about new technologies and is currently developing websites in her free time.