State of Canadian Tourism in 2018

The Many Languages of the 2018 World Cup 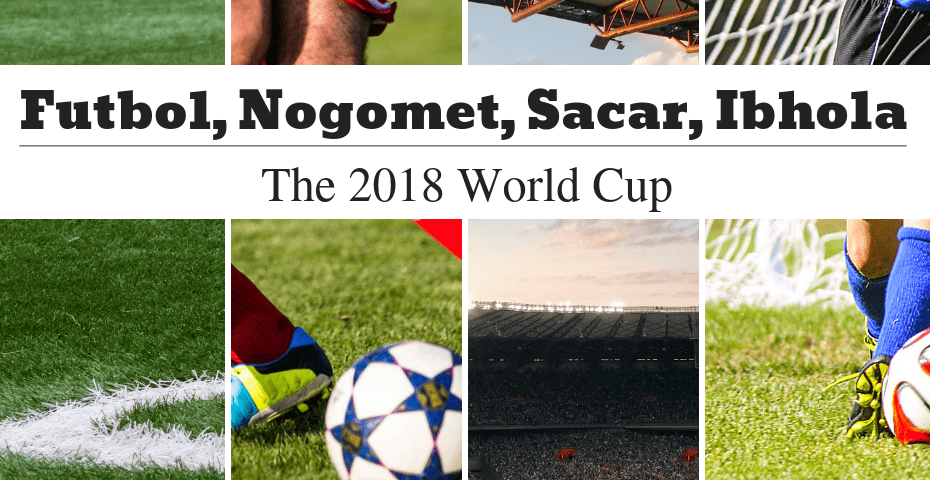 Languages and Cultures come together in the 2018 World Cup

Time for the kick-off

The World cup is one of the largest and most diverse sporting events in the world, and for a huge group of people, the most anticipated and anxiously watched.  The World Cup is a global display of sportsmanship, skill, and national pride.  Thousands of fans fill the seats in each stadium, and millions follow the games on the radio, television, and online.

2018’s World Cup is playing out in Russia, across 12 stadiums and 64 games.  The matches are being broadcast, recorded, commented on, and analyzed all over the world in real time.  With so many tuning in, the role of professional translation services cannot be overstated.

In 2018, thirty-two teams are taking the field against each other.  There are some firsts this year; 4 Arab nations are participating: Tunisia, Saudi Arabia, Morocco, and Egypt.  Also playing are three Nordic nations: Denmark, Sweden, and Iceland.  The 2018 World Cup bears a somewhat different face considering the new teams and some noteworthy absences, such as Italy and the United States, whose teams did not qualify.

The games are a time of intense competition, and passions are running high, but the World Cup is also about international connectivity and merriment between peoples.  After South Korea’s victory against Germany, which helped Mexico progress to the knockout phase, a group of Mexico fans visited the South Korean embassy and invited the ambassador to come out for tequila.  He accepted amidst cheering and chants of “Koreano, hermano, ya eres Mexicano,” or “Korean, brother, you are now Mexican.”  This illustrates the spirit of the World Cup, and the importance of multilingual translation services, perfectly.

A mélange of language and culture

Among the 32 teams, the 2018 World Cup players speak about 20 different languages among them.  This year’s unique lineup introduces more speakers of French and Arabic as well as Nordic languages.  The games’ officials and assistants come from 46 different nations.  Add press crews, security, medics, and the fans, and each stadium becomes its own world, with dozens of cultures and alphabets represented.  How do all these people interact so as to keep the matches running smoothly?  Referees are making calls while coaches, players, and fans are shouting in their respective languages, making for a confusing blend of sound.

FIFA, the sport’s governing body, uses 4 official languages to run the games: English, French, Spanish, and German.  The dominant language of the host country, Russian in 2018, is also included.  For in-game communication, hand and body gestures along with signs and colored flags greatly speed up comprehension time.  Even with these efficiency measures, lacking the presence of professional language translation services would cause the World Cup to come to a screeching halt.  A professional translation company can provide the most qualified translators and interpreters to work at events for the benefit of the crowd and serve at the many meetings between officials and team representatives.  They also translate and proofread speeches for opening and closing ceremonies and keep a watchful eye on the matches to anticipate when translation or interpretation services will be needed.  In this way, professional translators and interpreters work across the network of the games to keep things running smoothly and to keep the focus on what everyone has come to be a part of the game.

Each World Cup develops its own personality each year through the different talents, languages, and cultures that come together to make it happen.  With each chapter in the history of the World Cup, new strides are made in human communication through the work of professional translation services.  Whether you call it football, soccer, or something else, it is always special when multiple languages and cultures join to speak the language of sportsmanship and friendly competition.