Translation services at your home 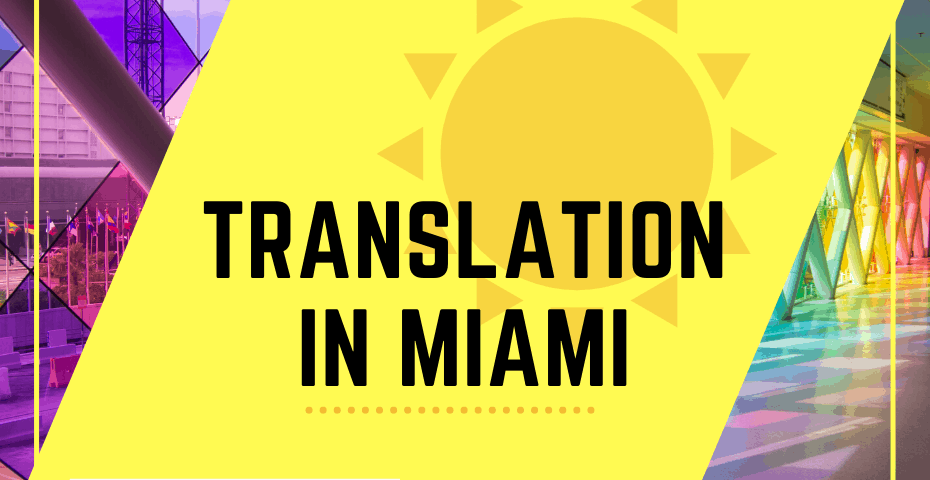 Today we’re going someplace especially fun: Miami!  Nicknamed the Magic City, Miami lies in the sun-washed southeast portion of Florida.  To the north you’ll find Fort Lauderdale, down south, the Florida Keys.  West will take you to the Everglades, and to the immediate east, the Atlantic Ocean’s Biscayne Bay.  Soca music echoes on the salty breeze, egrets stroll in the shallows, and the smell of adobo cooking around the next corner all come together to say, bienvenido a Miami.

Miami is perhaps best known for tourism, being within driving distance of landmarks like Walt Disney World, and being the home of the Miami Dolphins and Miami Hurricanes.  Miami’s beaches, resorts, and food scenes are second to none, and when the sun sets over the wetlands, the city lights up, and it’s party time.

The city of Miami is a natural hub of international activity.  It has a renowned airport and seaport, is convenient geographically, possesses rich natural resources, and is home to a lively multilingual, multicultural population that has turned the city and surrounding areas into a shimmering blend of color and sound.

Let’s look at some of the languages and cultures that call Miami home, and what your company can do with this information to use language translation services for business and marketing.

Miami is exceptional among U.S. cities in that it has a “minority-majority” population.  Per the last census, about 70% of Miami’s population is Hispanic, with most foreign-born inhabitants hailing from nearby Cuba, Central America or Latin America.  About 19% of Miami residents have Afro-Caribbean roots, and the rest are mostly of European or Asian descent.  Miami’s official language is listed as English, but in practice, that is not the case.  Data from 2016 shows that about 73% of Miami residents do not speak English as their first language, with almost 65% of these fluent in Spanish only.  Spanish is easily the dominant language of Miami among the 100+ languages that can be heard in the city, which include French, Tagalog, varieties of Creole, and indigenous languages like Dakota.

Miami shows a trend of moving toward a more even blend of Spanish and English.  Most individuals and business owners recognize the benefits of being multilingual.  Language services are widely used in Miami; Hispanic business owners are using English translation services to market to the English-speaking population in Miami and the rest of the mainland, where English speakers are a majority.  English-speaking business owners in Miami must translate their material, from legal documents to advertising, into Spanish or miss out on sales from the Spanish-speaking population.

Talking to People in their own language

Now, thousands of Miami residents are bilingual, but we should not use that as an excuse not to invest in language services.  People show a marked preference for shopping, consuming information, and interacting in their native language.  Marketing to a demographic when you’ve taken the time to translate your material into their primary language and dialect goes a long way toward getting their business.  But It’s not just translation.  Localization is a crucial part of effective multilingual marketing. Many companies cater to Latin-American countries in Miami and it is important to localize the Spanish Translation to the country where the translation is going to be used. What does localization mean?

Localization is the customization of the translated content for its intended recipient.  To localize effectively, you need to use a team of native translators from the target country. With that, the professional translators will know the vocabulary and expressions commonly used in the country and will translate the content mindful of the culture and values of his country.

Especially in marketing, it is important to know and understand your audience to have effective communication. Knowing the audience is even more important during a translation project. The marketer must know how their target market thinks, what they like, what they dislike, what they need right now, what they will need tomorrow, how they feel about competitor’s brands, etc.  Marketing to a culture you haven’t studied carefully could be a recipe for disaster.  Our translation agency uses professional translators fluent in both your market’s primary language and their culture for laser-focused localization, a crucial part of an effective marketing campaign.

Let’s take a look at some of the industries of Miami and the way language services support each.  No matter your industry, JR Language has professional translators experienced in that industry who can provide you with output that is correct down to the last period in the last sentence.  No matter what language you’re starting with, and no matter what language you need your material translated into, our translation agency has the right translator for your project, down to regional dialect.

Preparing for Tourism in Miami

Tourism is probably the hottest industry in Miami.  With the features mentioned above, how could it not be?  Thousands of people from all over the world visit every day to see family and friends, do business, surf the sapphire waves, see the wildlife, try new foods, or just lie on the beach and soak up some sun.  These people all bring their languages, cultures, and ideas to Miami, and Miami is ready.

Tourism relies on language services to communicate and pass information to the tourist.  You can’t market a destination to clients without website translation, document translation for brochures and travel guides, as well as legal document translation like waiver forms.  Professional interpreters guide travelers on tours, making sure they get the most out of their experience.

Language translation also protects travelers, whether it’s in the form of a translated restaurant menu or a multilingual sign warning against diving into deceptively shallow waters.

Entertainment and Media in Miami

Host of the Latin Grammy Awards, with its own Art Deco district, film industry, and the beautiful Viscaya Museum and Gardens, residents and tourists find no shortage of things to do in Miami.  Spanish-language media is a large part of the Miami entertainment industry, with companies like Telemundo and Universal Music Latin Entertainment housed there.  Film crews from all over the world come to shoot in Miami’s colorful neighborhoods and along its lush beaches.

Language services are an essential part of the entertainment industry.  Video translation allows studios to distribute their content worldwide to a multilingual audience.  The usage of subtitles and voice-over is common practice in video and audio translation within the entertainment Industry. Your company should work with an experienced translation agency to enjoy quality of service for your video translation needs, so you can wow your audience with your translated website, social media, and digital ads.

Miami is a superpower when it comes to importing and exporting.  The Port of Miami sends and accepts tons of cargo each day from Miami’s neighbors and the entire world.  Florida is a top producer of fruits, vegetables, and decorative plants, and translation services ensure that these can be enjoyed from one horizon to another.

Trade agreements, invoices, certificates of origin, insurance documents, legal documents, all must be translated by a professional agency with industry experience offering certificates of accuracy and apostille.  The next time you slice into a juicy mango shipped in from Mexico through Miami, thank a translator.  Translation for international trade is a reason that we can enjoy tropical fruits even in the heart of winter- because a company used professional translation services so they could build a strong relationship with another business owner in India, or Brazil, or Uganda, to get that fresh produce to your table.

Llámenos Hoy, Give Us a Call!

If you’ve decided that now is the time to engage with the world and break down the language barriers that hold your business back from reaching its full potential, reach out to us today.  JR Language is ready to take your message to the far corners of the earth, and Language Translation Services in Miami is a great place to start.