The World of Spanish Legal Translation

The Importance of Language Services during COVID-19

Language Services Landscape in the USA 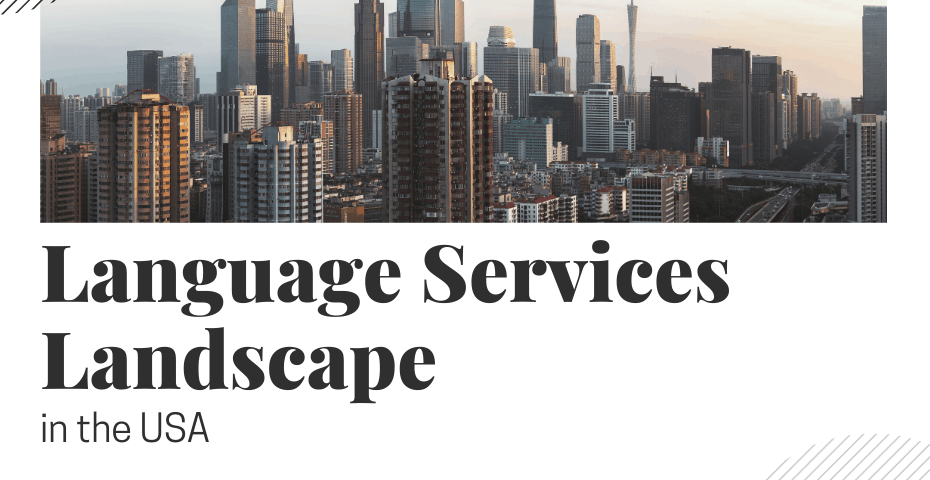 Top Foreign Languages Spoken in the US

The United States is home to over 320 million people. While English is the most commonly spoken language, and is the default for most business interactions, it is far from the only language spoken in the country. In fact, in this great “melting pot”, there are over 350 languages spoken throughout the country. Out of those, there are a handful of languages more widely spoken than others.

The US has no official language and while English is the unofficial official language, there is nothing in our Constitution designating it so. At the time of the American Revolution and the initial creation of our government, there was quite the variety of languages and the idea of designating one over all the others was considered undemocratic and threatened individual freedom. Today the American Civil Liberties Union argues that establishing English as the official language would violate First Amendment rights and the Civil Rights Act of 1964 guarantees a person’s right to accommodation of language services.

Because of our long history with open immigration, countless languages have entered the country along with their speakers. Throughout the country, there are pockets of the population that speak languages other than English (LOTE) ranging from Spanish and French to Chinese and Tagalog.

Translation services for common LOTEs is essential for government, health care, and education services, but it is not limited to these areas of society. All businesses can benefit from offering translated documents and interpretation services. Having language options on your website, product descriptions, or marketing materials is an easy way to expand the reach of your business without implementing any changes.

Top 10 Languages other than English (LOTE) spoken in the US

Unsurprisingly, Spanish is the most common LOTE spoken in the US, with over 13% of the population speaking the language at home. Of course, it’s important to note that “Spanish” is used as a catch-all term for a range of dialects within the language. Southeastern states may use Cuban or Puerto Rican dialects while Mexican Spanish or a Latin American dialect may be more common in the Southwest.

This stands true for all the languages on the list. While the foundations of the language may be the same, regional dialects can produce big changes in grammar, slang, and other linguistic idiosyncrasies. It’s important to know not just the native language of your audience, but their specific dialect as well. If someone is speaking Creole, are they speaking Spanish, French, or Haitian Creole? These details are where using a translation services company will deliver far better results than any computer-generated translations or machine translations.

Simply knowing the number of LOTE speakers in the US doesn’t paint the full picture of the diverse makeup of the country.

All business and service organizations can benefit from offering translated versions of their website, courses, product descriptions, and marketing materials. Partnering with a language translation company is the best approach to review options to facilitate the translation services projects. Project managers can help you navigate what your options are to create your vision from anything from websites to documents of any type, to audio/visual projects.

The language landscape of every country in the world is different. It is a product of its history, immigration, geography, neighbors, and several other elements that add to the diversity of that language scene. The US is no different. The US is a large country with many different factors affecting the many different areas concerning language shifts. This makes it important to understand your audience’s language in order to adapt your language offering to the need of the city or state served.

Take, for example, the COVID vaccination. At the state level, it is important to provide accurate and timely information for residents looking for information. But this information needs to be available for all residents in their language of preference to facilitate the flow of information. In New York State, Spanish, Korean, Bengali, Haitian Creole, Chinese, and Russian translations are offered. As it can be seen in the image below

In the State of Georgia, the set of languages offered is different. Chinese, Haitian Creole, Korean, Portuguese, Russian, Spanish and Vietnamese translations are offered.

Even if your business is conducted domestically, it is important to review the language landscape of your audience to explore if translation services will be beneficial for your business. Another language service to evaluate, from the customer service point of view, is to see if interpretation services will ease the communication with your clients and users who are not English proficient.

Below we present a few examples of communities within the country with large LOTE populations.

Michigan is home to nearly half a million Spanish speakers, who make up 5% of the state’s population.  It is also home to the largest concentration of Arabic speakers in the country, some 132,000 people, or 13.2% of the country’s one million speakers. With such a dense population clustered together, companies in Michigan that work with Arabic speakers will ease communication by providing Arabic translations for websites and marketing materials, as well as having Arabic interpreters on hand.

Spanish is the second most common language in the state, with nearly 200,000 speaking it at home, or 3.4% of the state’s population.

Perhaps surprisingly, Minnesota is home to the largest population of Hmong speakers in the country. With 66,000 Hmong speakers, it is second only to Spanish for the most common LOTE language in the state. Hmong is a specific dialect native to Southern China, different from Mandarin or Cantonese. Providing adequate services to this population relies on accurate and timely Hmong translation services.

Minnesota is also home to more than 58,000 Somali speakers. While a small percentage of the overall state population, it is still important that these speakers have access to the same quality of care and life as native English speakers. Interpretation services can go a long towards making this a reality.

29.7% of the Florida population speak a language other than English at home, nearly 10% higher than the national average.

The most common language other than English spoken in Florida is Spanish, with 3.94 million people or 20.9% of the state’s population speaking Spanish at home. Within this number, there are a variety of Spanish dialects spoken, including Puerto Rican and Cuban, with a number of other Latin American-specific dialects present as well. Spanish translation is a way of life for many residents, and businesses and government services are expected to keep up as well.

The second most common language in the state is French Creole with 361,000 people or 2% of the state’s population speaking it at home. French and Haitian Creole are similar, and often used interchangeably in government reports. However, there are grammatical and colloquial differences between the two, and it’s important to understand which is more prevalent with your audience to offer the appropriate language version.

Portuguese is also common in Florida, with 87,300 people or .5% of the state’s population speaking it at home. But it is important to localize the Portuguese translation for Brazil since most of the audience that speaks Portuguese in Florida is from that country, not from Portugal.

As the largest city in the Lone Star State, Houston boasts an incredible melting pot of languages. Spanish is common throughout Texas, with 7.37 million speakers, or 29.5% of the state’s population. This percentage rises again when you look specifically at the city of Houston, where 38% of the population speaks Spanish at home.

Vietnamese has been rising in the ranks of common LOTEs for over a decade, and is now the third most common language in Texas, with .08% of the population speaking it, or 206,000 people. This rises again in Houston, with 1.5% of the city’s population speaking it at home or 31,680 people. Vietnamese translation services are rising in importance not just in Houston, but throughout the country.

Chinese and Tagalog also have a strong presence in the state with 159,000 speakers and 80,200 speakers respectively.

Localize the Language of Your Message

After a brief review of the language landscape of the USA, with several examples and with numbers that support its needs, we hope to give you an idea of the importance to think about what other languages are needed in your marketing mix and in your supporting material to make your company speak the language of its clients and potential clients.

After a brief review of the language landscape of the USA, with several examples and with numbers that support its needs, we hope to give you an idea of the importance to think about what other languages are needed in your marketing mix and in your supporting material to make your company speak the language of its clients and potential clients.