Translation Services: Does Your Business Need Them Now? 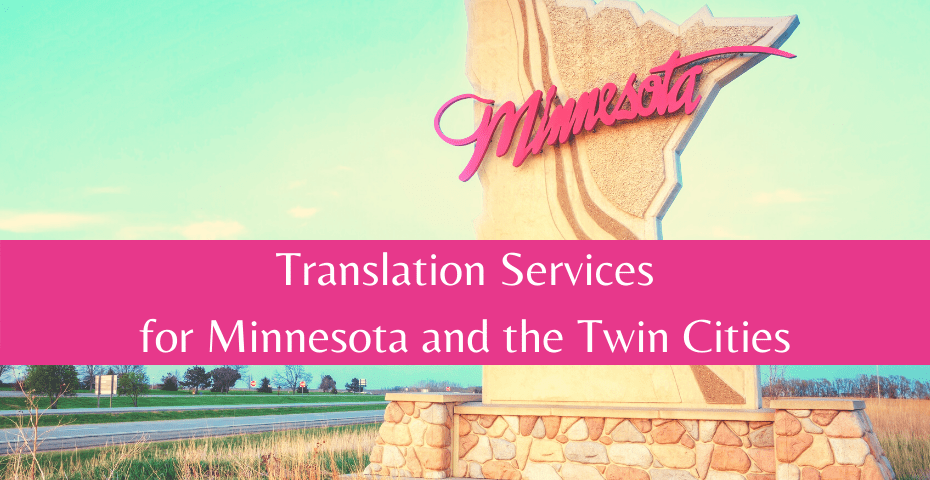 In east-central Minnesota, three rivers converge: The Mississippi, the Minnesota, and the St. Croix. At this juncture lie Minneapolis and Saint Paul, the Twin Cities. Saint Paul is the state’s capital, but Minneapolis is the larger of the two and the most populous in the state.

Today, Minneapolis and St Paul are thriving centers of art, business, and academia. Target Field draws thousands of baseball fans every year, joggers and skaters fly along the trails linking Lake Calhoun, Lake of the Isles, and Lake Harriet. A quiet stroll through Walker Art Center’s sculpture garden calms the spirit, and a bout of ice hockey invigorates the body.

JR Language is a translation company that offers language services for Minneapolis and Saint Paul, and we understand the area’s language diversity and we recognized it is a prime area for translation and interpretation services.

What are Minneapolis and Saint Paul Famous For?

The Twin Cities boast some impressive numbers when it comes to its quality of life. Minnesota was ranked as the 3rd happiest state in 2020, and Minneapolis is also #3 on the list of the top 100 happiest and healthiest cities. The Twins rank highly among United States cities in many ways, including:

Languages of the Twin Cities

Minnesota has immigrants from different countries and areas of the world: Canada, Asia, Mexico, and Africa. With that influx also comes new languages and cultures to the area.

A multitude of languages are spoken in the Twin Cities, from Tagalog to Russian to Chinese to Hmong to French to Arabic to Somali. Indigenous languages are preserved there as well, like Ojibwa and Dakota. As is the case in the rest of the US, Spanish is overall the most widely spoken language other than English. However, there are exceptions in certain regions, like Ramsey County, where the most common language besides English is Hmong, then Spanish.

We receive many requests for Interpretation and translation services for many languages including Hmong, Somali and Spanish. Much of these are for legal purposes, medical and the academic sector.

Per data collected by Minneapolis public schools, 75% of classrooms have at least one student whose first language is not English, and that is expected to increase. “We are preparing all of our students to be global citizens,” said Elia Bruggeman, the Deputy Education Officer at Minneapolis Public Schools.

Translation and interpretation services have a place in every industry.

Language barriers should not be seen as obstacles. Translated versions of content are the opportunities to reach clients and partners, and build relationships waiting to happen at a local and international level. It does not serve humanity to treat language differences as dividers in our globalizing society, especially when there are language service professionals available and ready to help.

For products and services that are sold on-line, localized versions of the website is another opportunity for more exposure. Most non-English speaking internet users prefer to shop in a language other than English. There are thousands of costumers and colleagues in the world waiting to connect, and we can open the door to those connections with language services.

Use the diversity of Minnesota as an opportunity to open your company, product and services to other languages, and cultures at a local and international level.