How Translation Services In San Francisco Make a Difference 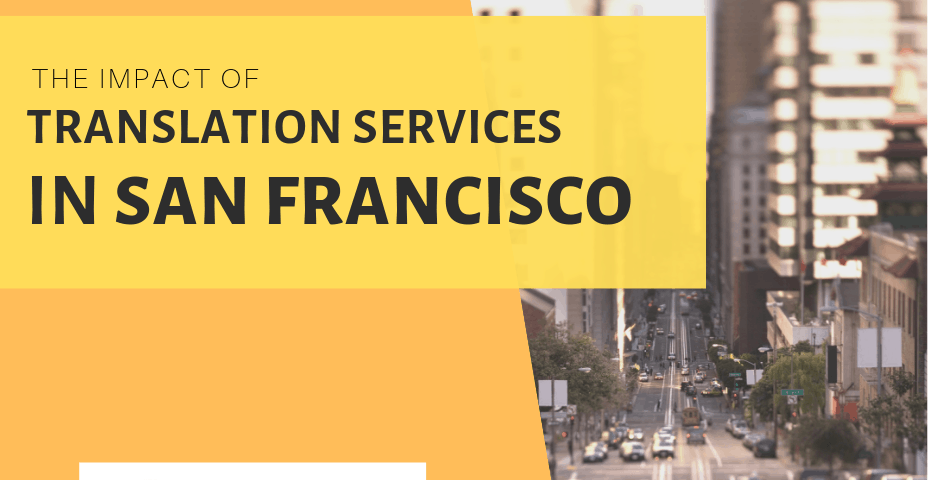 Why the need for Translation Services for San Francisco?

Poetically referred to as “The City by the Bay,” San Francisco beckons visitors from California’s shores.  California has been spoken of as a promised land in folklore from Spain to Asia to colonial North America.  Its verdant landscape and opportunistic atmosphere have made it a prime spot for business people, students, and fortune seekers of all creeds and origins.  Languages come together here in ways that are found nowhere else.  Let’s explore the city’s linguistic landscape and how translation services in San Francisco can influence your business if you want to sell to San Franciscans.

At least 40% of San Francisco speaks a language other than English at home, and that percentage is expected to grow in coming years.  The young people emerging from cultural melting pots like San Francisco are well-educated, tech savvy, multilingual, and making their presence known in marketplaces, schools, and governments.  Using language services for your business is an investment in the future of commerce with the large populations of San Francisco and similar cities.

One of the most ethnically and linguistically diverse cities in the United States, San Francisco’s streets, shops, and homes hear a mix of Punjabi, Swahili, Navajo, and Arabic, but the three primary non-English languages are Chinese, Spanish, and Tagalog.  There are over 160 languages spoken in San Francisco, with the most common non-English language being Chinese.  Close to 1 in 5 people speak Chinese as their first language.  Like Miami, San Francisco is a minority-majority city, where people of European ancestry make up less than half of the population.

The Chinese people have been an important part of San Francisco since its inception, with their work on the transcontinental railroads giving the city unprecedented accessibility.  Rising from the hard labor and widespread abuse of the Gold Rush era, the domestic and foreign-born Chinese presence has grown in power, numbers, and influence.  San Francisco’s city government requires language services and translated documents to be available in the Chinese Language at all times.  This ensures awareness of current events, information on the city’s government, and the ability to exercise voting rights.

There are many Chinese dialects, including Mandarin, Hakka, Jin, and Min present in San Francisco.  Written Chinese is different from spoken Chinese: There are two written forms- Simplified or Traditional Chinese, and both systems use alphabets that are nothing like the English alphabet.  How do you know what dialect or written mode to use for your San Franciscan audience?  Select a Translation Company In San Francisco that has access to a qualified interpreter and professional translator for each interaction.  You want your message to resonate with the recipients in person or in written form.

We predict even more Spanish language inclusion in local governments and commerce in the years to come, and are prepared to provide the Spanish translation service to meet this growing need.  No matter the industry or subject matter, file type or audience, JR Language is ready to handle the English to Spanish or Spanish to English translation project.

The Philippines is a nation in the mid-Pacific made up of over 7,000 islands, known for its breathtaking beauty- beaches, mountains, rainforests.  Many Filipinos live and work abroad, and San Francisco is an ideal location where they can come to study and work.  Translation Service into or from Tagalog is necessary to adequately serve this demographic.  Filipinos are an outgoing people, more than willing to engage with the cultures they move into and share their own.  Many Filipinos are already multilingual, speaking Tagalog, English, and Spanish at home.  Decades of colonialism and international trade have left their mark on the linguistic landscape, and international trade tends to influence the lingua franca of the area.

The Filipino community in San Francisco is leading language support initiatives and gaining traction.  As of spring 2014, Tagalog is now the third required language for the city government to use to serve its residents.  Government documents must now be translated into Tagalog, and interpreters skilled in Tagalog must be available at public civil assemblies.

Translating Your Business for San Francisco

Where do you get started on having materials translated for your business so you can make your mark in San Francisco?  Here are a few items we recommend discussing with a professional translation agency about:

English has the largest representation online, meaning that multiple linguistic markets are going under-served.  According to current data from Internet World Stats, about 25% of internet users speak English.  What language is second on the list?  Chinese, at about 19%.  Imagine giving your website the power of Chinese Translation and SEO for an online market that big.

To do business in other languages, you’re going to need translated legal material.  Formation documents, licensing, patents, real estate documents, human resource material, all must be perfectly translated to stand up to legal scrutiny.  The language of law is complicated on its own, so never trust a legal translation project to a multilingual employee or machine translation software without professional revision.  You need a professional legal translator to navigate the legal language and the source and target languages.

As with legal translation, your financial documents translation will need to stand up to scrutiny if you want to do multilingual business.  If you have a meeting with a Hispanic investor, you should have copies of statements, projections, etc., in Spanish, out of courtesy if not necessity.  If you’re selling to a buyer who prefers Simplified Chinese, they’ll appreciate it if you present documents translated into Chinese.  You may also need a professional interpreter present during the meetings and calls.

One important outlet to use a professional translator for is social media if you have a multilingual audience.  Think of the share-ability factor.  Social media is very personal, which is why brands really need to be on their markets’ level to be effective.  You need quality localization and cultural fluency.  Your message needs to fit right in with your target market’s reality, interests, and perspective on the world.  A professional translation agency makes the difference between an off-base post that gets ignored and one that leads the viewer to like and follow your page.

Translation for marketing assets also include brochures, websites, training, presentations and business cards. You will have the opportunity to talk multilingual locally and globally.

If you want to do business in the thriving mix of languages and cultures that is San Francisco, you need a professional translation company as a trusted partner and resource.  If you have a product or service that people need a round the world, don’t just think local, but work with the mindset that we are a globalized world.  Introduce your business to the world by translating your company in every way, from financial spreadsheets to Twitter posts to product descriptions.

Contact JR Language Translation Services today for a consultation and start your own global success story in San Francisco.