What You Need to Know About Successful Simultaneous Interpretation

How to Minimize Post-Editing in Document Translation

7 Things About the Hispanic Market You Might not Know 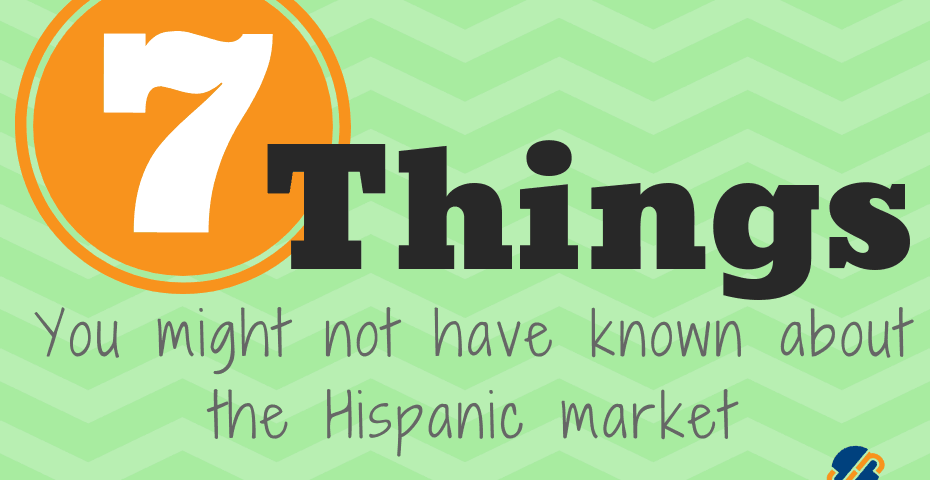 The Hispanic demographic in the United States has grown into an unstoppable force that brands cannot ignore.  Since 2000, the Hispanic population has had the most growth than any other demographic in the U.S.  Hispanics accounted for 18% of the U.S. population in 2016.  U.S. Hispanics have a current spending power of $1.7 trillion, a number that is expected to increase in coming years.

Knowing and Translating for the Hispanic Market = Success!

Did You Know these Facts about the Hispanic Market?

We’ve done some research into the Hispanic market and have come across a wealth of information.  In this Translation Services blog, we’d like to share with you some of the facts that we found to be most enlightening, and in some cases a bit surprising!

When you read these facts, we hope you’ll have more insight into the Hispanic demographic and how and why they make their purchases.  You will also understand the critical role that Spanish website translation has in helping brands connect with the Hispanic market.

Hispanic internet users spend, on average, two more hours per week on their mobile devices compared to the rest of the population.  About 66% of Hispanics online own at least one smart-home gadget. They consume more video content online on their smartphones and are more likely than the rest of the population to do several tasks right on their smartphones including messaging, emailing, and using the internet to make purchasing decisions.

Hispanic millennials are more likely to engage with brands through the use of social media.  This digital-savvy group consists of about 24 million people, which accounts for nearly half of the entire U.S. Hispanic population! In a study conducted by Viant, 50% of Hispanic shoppers indicated that they had discussed a brand with others online or incorporated a brand’s hashtag when messaging others.   Contrast this with the 17% of non-Hispanics who report being as engaged with brands online.

Hispanics are not big sale seekers as is often believed.  Less than a dollar of every $5.00 spent by Hispanics are on sale items, which actually makes Hispanics the ethnic group that spends the least on discount sales.  This is critical!  Brands that want to connect with Hispanic audiences cannot rely merely on price discounts to lure them in.  The more essential tools are advertising and branding that is culturally resonant and appealing to the Hispanic market. So, content in the Spanish Language that is culturally engaging is key and important to reaching this group.

U.S. Hispanics perceive brands that advertise in the Spanish language more positively.  In a survey conducted by Facebook IQ, a large percentage of US Hispanic respondents indicated that brands that advertise in Spanish give the perception that they value the Hispanic community.  But beyond this, U.S. Hispanics are drawn to marketing content that is culturally relevant.  A critical process that guarantees culturally resonant content is transcreation.  Transcreation is often known as “creative translation” and it adapts a message from one language to another in a way that is culturally acceptable to the target audience.

Engage the Hispanic Market with Spanish Translation and Beyond

In marketing, they say that good content is key.  In the case of the Hispanic Market, good Spanish content is the key to unlocking the buying power of up to $1.7 trillion.  If you are looking to engage a loyal, highly enthusiastic audience for your products and services, the Hispanic market is perfect, and best of all it is growing every year!

But remember that winning over the Hispanic audience requires efforts that go beyond a simple word for word Spanish translation of content. English to Spanish translation is but one of the first steps of helping Hispanics understand your brand content.  Be sure to include in your brand content culturally specific aspects that will get Hispanic audiences to pick up their smartphones to not only buy from you but also help you spread the awesomeness of your brand online!