What You Need to Know When Requesting Birth Certificate Translation

Translation a Key ingredient to Big Business in Mississauga, Canada

English to Spanish translation a Critical Part of your Marketing Priorities 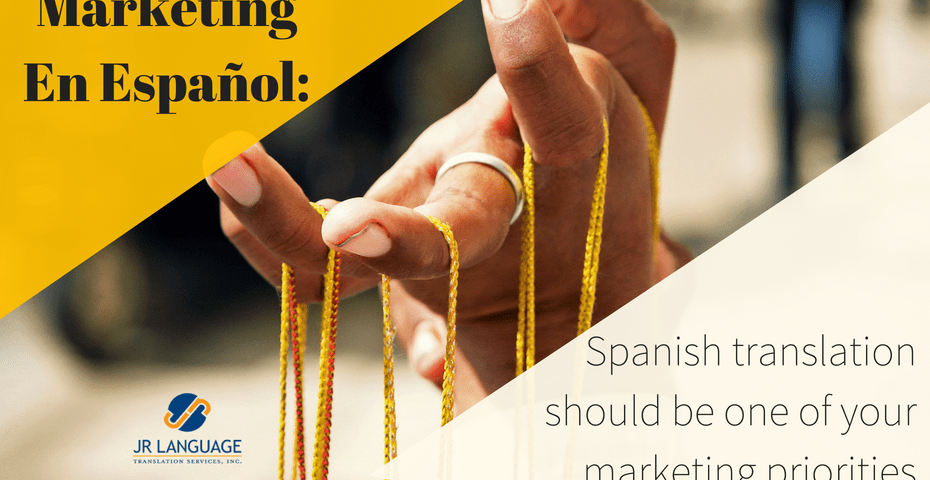 Securing a Future within the Hispanic Community with Spanish Translation Services

Spanish speaking people now make up over one-sixth of the population in the United States, and that number grows by the day. By 2050, they are expected to make up approximately 30% of the population. The buying power of a market that size is immense, yet the needs of the Hispanic market remain underserved. If the Hispanic Market brings good potential clients for you, then it is worth considering how Spanish Translation can be included in your marketing mix.

A wealth of opportunity exists for the company that is ready to reach out and offer their products and services to the Hispanic market in an effective way. That company must work closely with a professional translation agency to discover and meet the needs of the Hispanic community. A bilingual employee, who’s proficient in the language but not familiar with the activities and rules needed to produce professional translated content, is not a good choice for marketing translation, and certainly not for medical and legal translation. That employee is even less suited for interpretation services when there is little time for research and he has to perform on the fly. Someone in Accounting cannot know the subtleties or vocabulary when interpreting at someone’s bedside in the hospital, or on a tour through a museum. Only a language translation company staffed with qualified, native speakers of Spanish and its dialects can provide a professional translation of documents. The field of marketing seems less challenging but presents the stimulating usage of double meaning, the need for an inviting and fluid content to effectively engage and attract your clients. Marketing content requires “transcreation” during the process of marketing translation and other specialized technical activities.

When it comes to colloquialisms and terms marketers use to engage an audience, it’s not often that something in one language translates easily to other languages. Something as easily understood in English as an actor “sweeping up awards” does not translate well, if at all, in other languages. In many countries, they would think the actor is sweeping them into a dustbin! Transcreation helps to figure out the best way to effectively communicate an idea in a less formal context. Marketing wants to appeal to a gut reaction, something you can quickly identify with, so the words have to be immediately engaging. That is why transcreation is needed. If a company wants to ensure a strong future for itself within the Hispanic community, it needs to use
professional Spanish translation services for its products, services, website, and all marketing materials.

Some examples of Spanish Translation Services needed in everyday occurrences:

An important thing that any business can do to increase sales is to know its audience, its wants, needs, likes, dislikes, and tendencies. One fact many companies become stuck on when trying to reach the Hispanic and Latino market is that Spanish speakers consume media in both English and Spanish, so shouldn’t English be sufficient? Absolutely not. My children all speak both Spanish and English, but they gravitate towards one language for certain things. When watching the World Cup, it was watched with a Spanish-speaking sportscaster. Because of their background, they tend towards sites and products that include Spanish because it makes them feel included and respected as a consumer

Demographics play a role in the choice between selecting media in English or Spanish Language:

When to tread carefully

As with any language, differences in dialect are important to be aware of so you know exactly which ones to use to properly engage with your target audience. The Spanish dialect used in Texas tends to be closer to the Spanish from Mexico due to the immigrants there that largely come from Mexico. Mexican Spanish will be different in some ways from the Spanish needed in Florida which is closer to the Spanish used in the Caribbean and Latin American countries. Localizing Languages remains a vital part of any translation project especially if your content is meant for a specific country like Argentina or Mexico., The translation company will need to select professional translators who grew up using those dialects in these countries.

It is important to note that though the terms are often used interchangeably, there is a difference between “Hispanic” and “Latino.” Hispanic refers to those who speak Spanish of any kind, from Iberian to South American and all varieties in between. “Latino” refers to people from Latin America or of Latin American descent who possess cultural ties to the region. Take care to use the proper term when speaking specifically of one or the other, and be sure to make finding out the preferences of the target audience part of your marketing research.

Reach for a helping hand from a professional translation company

Reaching out confidently to the Hispanic and Latino community is best done with a professional advisor at hand, as well as a translation agency with native speakers of Spanish and its dialects who can offer translation and localization services in any area from marketing videos to legal documents. Accurate, consistent translation from English to Spanish not only ensures that a company’s message will be understood but also brings it to life with in-depth knowledge of cultural sensibility.