Legal Translation for the Insurance Industry

The Importance of Transcription Services for Multilingual Communication

Legal Interpretation and Translation for Chicago 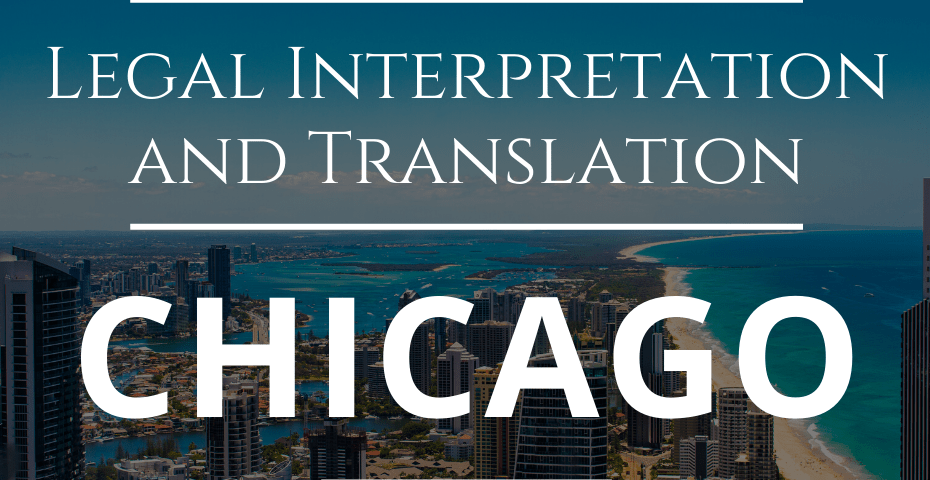 We’ve talked about legal translation on this blog before, but today we want to shift gears slightly and talk more about legal interpretation combined with legal document translation. We’ll use Chicago as a case study, as Chicago is a thriving city full of people speaking different languages. Chicago is a trade hub and intellect hub, with people bringing their languages, talents, and ideas from all over the world to combine there.

The majority of Chicago residents speak English as their first language, with the majority of those who don’t speak English at home speaking Spanish. The third most common languages are Polish and Chinese, but after Spanish, there is a notable drop-off in the number of speakers.
The need for legal interpretation and legal document translation into Spanish is rising as the number of Hispanic residents in the greater Chicago area rises. Remember that legal translation and interpretation work both ways— just as English legal documents need to be translated into Spanish, and English speech needs to be interpreted into Spanish, Spanish legal documents and speech need to be translated and interpreted into English. It can get complicated, so make sure that you’re using a professional translation agency with professional and experienced translators for your Spanish translation needs.

Suppose there is a robbery at a grocery store in Chicago’s Avalon Park neighborhood. The accused robber speaks English and the store owner speaks Chinese. Immediately, the law firms serving each party secure professional legal translators and interpreters and begin their work.
After filing a complaint, discovery is the first phase in a legal case. During discovery, you build the basis of your case with hard data. The information gathered during discovery is the skeleton you’ll build your case on. It’s time-consuming and complicated but must be done with the highest level of dedication and care to get all the information possible in a usable form.
Courts have strict deadlines for submission, which can determine if a piece of evidence can be used at all. Having a reliable legal document translator on hand is essential if you’re going to meet deadlines; they won’t have to be told how important that is. There are several types of documents that go back and forth in legal cases, and all must be translated expertly.

What else happens during discovery? Lots of discourse between the parties in the case. Each party requests and receives information from the other parties that they intend to use in their case. It’s not like in the movies- there are no surprise witnesses or pieces of evidence brought out at the last minute. Everything is accounted for. That means that a lot of complex conversations between all sides of a legal case and their attorneys have to take place. Without an expert legal interpreter, there cannot be adequate exploration and collection of information. Legal interpreters make communication possible.

Suppose there is an instance of road rage in central Chicago where one driver cut another driver off, and the second driver intentionally sideswiped the first vehicle. The first driver speaks Spanish and the second driver speaks Polish. The attorneys have secured professional language services for their legal documents and conversations and arranged their cases. Now, the Polish speaker is about to be arraigned.
When someone is accused of a crime, an arraignment will take place. In arraignment proceedings, the accused will enter the courtroom and stand before a judge to hear the formal accusation made against them. According to the Sixth Amendment to the United States Constitution, those accused of crimes must be quickly informed of the charges against them in their own language.
Without a legal interpreter present, someone who does not speak the language spoken by the court cannot have their rights respected and cannot prepare themselves to deal with the charges. This is a denial of justice and human rights.

A tourist from Quebec who speaks Canadian French is visiting Chicago, and is in the Chinese-owned grocery store at the time of the robbery, looking at translated city guides. As a witness, the visitor is subpoenaed to testify in the case.
A deposition is like practicing for a trial and usually takes place in the attorney’s office. During a deposition, a witness is placed under oath and answers questions. Their testimony is transcribed and/or recorded. At least one professional legal interpreter would be essential in this instance, as they would have to convert the attorney’s questions to the witness, and the witness’s answers to the question. Both must be converted as closely as possible to verbatim, through the nuances of language and legal systems.

Translating and Interpreting Hearings in Chicago

The Hispanic driver decides to sue the Polish driver for their actions and the damage to their vehicle. Each attorney brings a professional legal interpreter and legal document translator onto their team, the case proceeds, and a hearing is conducted.
A hearing is similar to a trial in that it typically takes place in a courtroom but can also take place before government officials or a judicial committee, and arguments are made. Hearings tend to take less time than trials and determine the next steps in a case. During a hearing, arguments will be presented for or against certain actions, like dismissing the case or reducing penalties. A common goal is for the case to be settled out of court, and to reach a good compromise, and for that, all the terms must be precisely communicated to all involved and recorded in the appropriate languages. In a case like the one described; language translation services of quality are vital for the communication between all the parties involved

Whether you’re a litigant or an attorney, using a legal translation and interpretation agency as a trusted resource is a must in a multilingual city like Chicago, and in countless other areas. Using language services increases the number and range of cases a law firm can take on, avoids costly mistakes, and helps ensure that all sides are properly represented.
Contact our translation company with your case and requirements or fill out our contact form to find out more about protecting your client’s legal rights with translation and interpretation services in Chicago.